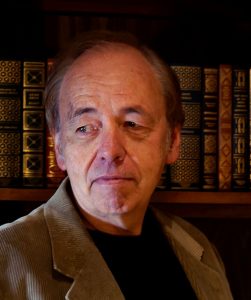 Tell us a little about yourself. Where were you raised? Where do you live now?
I was born and raised in Rumford, Maine, a small paper mill town. I attended the University of Maine and graduated with a B.S. degree in Engineering Physics. Other portions of my academic background include Electrical Engineering and Business Administration. I’ve worked in several capacities as a project manager, systems engineer, and Branch Head for the Department of Defense in Control Engineering, Welding Engineering, and Quality Material Control Analysis. I settled in Kittery, Maine over 35 years ago. My wife and I have two grown sons, and we have eight cats who live with us; stories unto themselves. They’re always such a help when I write.

At what age did you realize your fascination with books? When did you start writing?
I don’t remember the first book I ever read. But growing up I read a lot of books both fiction and non-fiction- anything related to science and science fiction. Writers like Paul French, A.E.Vogt, Arthur C. Clark, Raymond Jones. My first non-fiction book was published by John Wiley & Sons, Inc. and explained the practical applications of using solar energy for Domestic Hot Water. Years later I realized that my first book needed a successor to discuss Photovoltaic fundamentals and explain the economic advantages in using alternative renewable sources. My second non-fiction book entitled “SOLAR ENERGY: Photovoltaics and Domestic Hot Water-A Technical and Economic Guide for Project Managers, Builders, and Property Owners” was published by Academic Press (Elsevier) and released May 2014. After that I had my first novel published entitled “Journey Home – A Cat’s Tale”, published by a traditional publisher and released February 2016. My second novel entitled “Beware the Dither Bird”, released December 2018, is a provocative contemporary story about unheeded warnings and people’s associated indifference to inaction during a transitory period of time for a changing nation-an alarming and eye-opening profile of things to come. I have recently submitted my third novel to a publisher and am working on my fourth.

Who are your favorite authors to read? What is your favorite genre to read. Who Inspires you in your writings?
My current favorite authors to read include Donna Tartt, Markus Zusack, Anthony Doerr, and Hannah Kristin just to name a few. Anything related to history and science are perhaps my favorite genres, but also what I consider as literary classics as well. All authors inspire my writing. The more I read and write, the more improved I become.

Tell us a little about your latest book?
My latest book, just released entitled “Beware the Dither Bird” is a provocative, contemporary novel about two friends—one attempting to save a forest and its wildlife from extinction—the other attempting to warn people about foreboding satellite radio messages of harmful national events yet to occur. During the course of their resolve to fight for what they believe, both come to realize that large organizations can obviate the voice of any one individual.

Consequential harmful changes can occur because of people’s inattention to destructive policies, and that inveterate lies, misrepresented facts, and the deliberate obfuscation of pertinent information are common links. Two stories—one message, revealing a look into our future.

This provocative, contemporary novel is based upon actual national events, unheeded warnings about failing policies, and the associated indifference to inaction. It is a philosophical story about perceived decadence in a transitory period of time for a changing nation, about disturbing outcomes caused by people’s inattention to factual news reports, and about scientific speculation versus science fiction and fantasy. What will happen if we remain unaware of the facts in a changing world and continue to ignore the troubling events that surround us on a daily basis? The answer is contained in this story—an outcome that only you can decide. The story is an alarming and eye-opening profile of things to come…It is now available at Barnes and Noble, Amazon, and others. This particular novel took four years to write and two years through two complete editing cycles. (I usually write two novels at the same time and submitted another completed novel just as this one was released.)