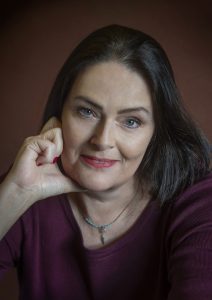 Tell us a little about yourself. Where were you raised? Where do you live now?
I grew up in England in a pretty market town and I still live in England, in the countryside. I have two wonderful dogs. Bella, the inspiration for Charlotte the labradoodle in my novel, is kind and clever and incredibly tolerant of our other dog, Sophie, who is naughty and silly, and spends hours zooming round the garden.

At what age did you realize your fascination with books? When did you start writing?
I was born in the 1960s. No social media, no Netflix. And here in England, TV was pretty basic: two black and white channels! So, when I was four, I started reading books and loved escaping into other people’s lives — and different worlds.

In the 1980s I tried writing Mills & Boons but my heart wasn’t in them. I started writing a thriller before that. Ditto. I only started writing seriously about five years ago when indie publishing took off. I realised I could write the book I wanted to write, keep all my rights to the story and sort my own branding and marketing.

Who are your favorite authors to read? What is your favorite genre to read. Who Inspires you in your writings?
Fantasy does it for me, with romance, mystery and twisty sub-plots! And authors who transport you into someone else’s shoes are the best. C. S. Lewis, Tolkien, Deborah Harkness, Angela Boord, Jim Butcher. Not very original, I’m afraid!

My mother inspired me to write. She was an author in the 1980s when it was much tougher to get published. I was a teenager, terribly self-obsessed, and thought being a published author was no big deal. My mother has dementia now so it’s really horrible that I can’t tell her how proud I am of her.

Tell us a little about your latest book?
“Stranded” was inspired by a dream and a TV show. I know … crazy. I dreamed I was back at university (a concrete-ugly 1960s campus here in England). So, in the dream, I got into a lift in a tower block but stepped out into a deserted country lane. And then I woke up and thought, ‘this is the start of a story.’ A while later, I was watching Downton and thought, ‘How would a modern girl cope in the real Downton?’ And then I thought, what would it be like to be torn between two boys, one a millennial and one born in 1904? It went from there!

My hero goes from starting university in 2017 to having to cope with corsets and boorish suitors and having no career options except marriage. Tough. She falls in love with one boy, but to survive may have to marry another. Also, tough. My readers are divided about which boy she should choose. Some support Team Hugo, others Team Freddy…

But … “Stranded” took five years to write. Book 2, “Escape” was much quicker, is being published in October 2021.

I have eccentric working hours. I wake up at 4.30 am to make the most of the quiet time before the household wakes up. Recently, I’ve been busy with marketing “Stranded,” but I want to get back into the habit of writing and editing in the morning, then doing admin/marketing in the afternoons. I also have a day job, doing the accounts for my husband’s company, so I have to make time for that too.

Publishing has been a rollercoaster ride. I’ve been incredibly lucky and “Stranded” is a BookBub Featured Deal on Valentine’s Day. Really excited!

If anyone’s interested in joining my Readers Club, via www.rosalindtate.com, they can get a free short story, exclusive to the Club. It’s a prequel to “The Shorten Chronicles” and once you’ve read it, you’ll see Hugo in a completely different light! I email everyone once a month with bookish news, but also with fun facts I think they’ll enjoy. Oh, and cute pics of Bella — Charlotte’s inspiration. What I hadn’t expected is that readers see “Stranded” in different ways and remember some aspects over others. Some enjoy the historical aspects, the gowns and etiquette, and others love the love triangle. Others are more interested in parallel universes and the science behind the portal. A broad church.

I love my readers!