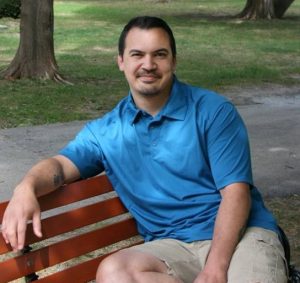 Tell us a little about yourself. Where were you raised? Where do you live now?
I was born and raised in Saratoga Springs, NY. I lived there for about twenty years, after which I moved all over the surrounding area. Now I live in Corinth, NY with my two boys and a close friend of mine. I had a dog named Simba when I lived in Lake George, but I unfortunately had to give him up when I moved to Corinth. I miss him dearly.

At what age did you realize your fascination with books? When did you start writing?
I was reading all kinds of books at an early age, including a large stack of comic books I had. I could read before I started kindergarten. I think my love of writing started in junior high, when I had to write a story about me coming face to face with a clone of myself. The story involved a lot of fighting. (laughs) I dropped out of high school at the age of 17, and a year or two later, I wrote a book that involved me and my friends. It was a fun story, but not the kind of thing that will ever see the light of day today. (laughs). The idea of writing The Roar of a Dragon started when I was around 21, and all I had in my head was the first paragraph of the prologue. I had no idea what I wanted the story to be or even who the main character was. It took a very long time for me to develop that in my head. In 2008, I started experiencing dizzy spells, and it became very difficult to do normal things at times. But one thing I could do was write, and the story finally started to come together during that time. Two years later, the book was complete!

Who are your favorite authors to read? What is your favorite genre to read. Who Inspires you in your writings?
I’m a big fan of the Dragonlance series written by Margaret Weis and Tracy Hickman. I’ve also read all of the Harry Potter books and even the Twilight series. Don’t laugh, the books were way better than the movies. (laughs) Lately, I’ve been reading the Dark Hunter series by Sherrilyn Kenyon, which are very good! If you couldn’t tell, my favorite series is fantasy! I’m also a pro wrestling fan, and I’ve read many book written by pro wrestlers. My writing style was very much inspired by S.D Perry and the Resident Evil series.

Tell us a little about your latest book?
The Treachery of a Weasel is the sequel to The Roar of a Dragon. In this book, Aidan encounters a series of speedbumps in his quest to stop Sirak from turning the people of the land into Ther-lor. An old rival of his reemerges and the subsequent melee results in the disappearance of one of Aidan’s companions. Wracked with grief, Aidan is desperate to save the companion and continue the fight against Sirak. The series will culminate with the book I just recently finished, The Cry of a Raven!