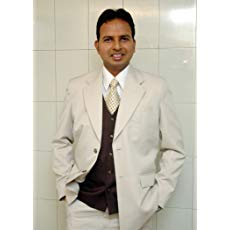 Tell us a little about yourself. Where were you raised? Where do you live now?
I am RKC Puthran, author of LOVECARNATION – An Epic TRILOGY Series .

I live in Dublin, Ireland along with my wife and my 7 year old daughter.

I was born and brought up in India. As a child, I was a voracious reader and would read just about anything that I could lay my hands on. I started writing short stories when I was in college though never submitted any of them for publishing.

Post graduation, I wanted to become a full time writer but writing jobs in those days were not just difficult to get but were also not very well paid. I had to earn for myself and my family and managed to get a full time permanent job in a company in the banking and finance sector as a junior officer. Through sheer dedication and hard work, I rose through the ranks over the years and managed to move over to London in the summer of 2008. However, Ireland, the land of writers, was calling me and within just 6 months, I was in Dublin, Ireland, havng landed myself a full time job in a bank. Since then I been living here and it is now well over 10 years.

My intense passion for writing never left me and I kept writing articles which were published in the newspapers. I also co-authored 2 non-fiction books in the last few years but did not credit himself on the cover as I wanted my name to be on the cover of a novel first.

‘LOVECARNATION – THE PROMISE’ is my debut novel and the first book in the LOVECARNATION Trilogy.
It is set for WORLDWIDE release on the 19th of May this year.

The book is currently available for pre-orders. You can get your copy here – https://www.amazon.com/dp/B07QLYY7XY/

At what age did you realize your fascination with books? When did you start writing?
I loved to read as long as I can remember. As a child, I would just pick up anything and read.

It was an advert in one of the newspapers during my college days that hooked my attention.
The advert read, “Why not be a writer?” I took up the course though never completed it.
I however started writing for national newspapers and can never forget the day when my first article was published. Thus the writer in me was born.

Who are your favorite authors to read? What is your favorite genre to read. Who Inspires you in your writings?
I read everything and in the last few years I have focused more on reading self-development books.

I started with writing articles and short stories long time ago to test my ability to put words on paper. I realized I was good when my first article was published, not just because it was published but because it was published in one of the biggest newspapers of India that time.
Then my full time job took over with hardly any time to write. I started writing again after almost a gap of 10 years. I wrote articles which again found publishers. I then co-authored 2 non-fiction books. The books did reasonably well but not great.

The story in Lovecarnation (my debut novel) dawned upon me some 5 years ago. Obviously the first version was very weak and when I look at the 9th version today (which will be the published version), the characters and the plot have come a long way.
I started actually sitting down and penning the story for Book 1 – The Promise in the Lovecarnation Trilogy some 2 years ago and it has been a lot of hard work and sacrifice, especially on the family front as they had to deal with me being behind a closed door every weekend.

It is immensely fulfilling to see Lovecarnation – The Promise on pre-orders today and up for release soon. I am sure the readers will love the characters I have built as much as they will love the plot and the story. The climax is epic and a thread of the story will be carried into the next book but it is not a cliff-hanger. I wish to make this very clear that Book 1 can be read as a stand-alone. I don’t want to force anyone to buy my second book though I am sure you will as my characters will become part of your life and you will want to know more about their journey.

Writing the novel was obviously the next level for me after articles, short stories and non-fiction. Authors like J.K. Rowling, E.L James and Indian authors Chetan Bhagat and Amish Tripathi have been my biggest motivators.

Tell us a little about your latest book?
My debut novel is titled – LOVECARNATION – An Epic TRILOGY Series: Book 1 – The Promise

Book 1 – The Promise releases on May 19th. It is on pre-orders on Amazon currently.

Preview – Rohan Rai is from India and has moved to California for a job though it is not exactly what he wants to do in life. He however has no choice as he needs to earn money to settle his siblings and to also finance his dreams.
He meets Shona at work. Now Shona is completely opposite to what Rohan is. Rohan is a workaholic and completed devoted to his goals. He doesn’t care whom he alienates on his meteoric rise to the top and he definitely has no time for love.
Shona on the other hand is a very easy going Irish girl, loves music and lives in the moment.

Though Rohan tries everything he can to keep away from Shona, he cannot stop himself from being drawn toward her. As things take a turn, Rohan is torn between his responsibilities, his ambition and love. Will Shona walk into his life or does fate have something else in store for both?

Well you will have to buy the book and read 🙂