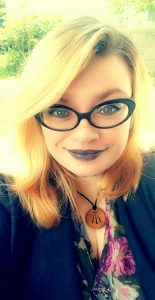 Tell us a little about yourself. Where were you raised? Where do you live now?
I grew up in Burlington, MA, a suburb not far from Boston. Now I’m out in Western Mass, where my mum grew up. I’m actually living on the street she lived on as a kid! It’s pretty cool. As for pets, I don’t have any at the moment, but two characters in my recent release—INTO THE FORGOTTEN FOREST—are based on two cats I used to have.

At what age did you realize your fascination with books? When did you start writing?
I think I’ve always loved books and storytelling. In our house, growing up, there wasn’t a room without a book. Even the bathroom! I’m not entirely sure when I started writing my own stories, but it was pretty young. Found one recently that I wrote when I must’ve been in the first grade, titled THE METAL SNOWMAN. It was kind of TERMINATOR meets FROSTY THE SNOWMAN. I think I was in the third grade when I was first published. It was a poem I’d written about my Nana. And I wrote my first full length novel at seventeen…but we do not speak of that abomination. Haha.

Who are your favorite authors to read? What is your favorite genre to read. Who Inspires you in your writings?
Oof, I have so many favorite authors! Genres, too. I am a big fan of Fantasy, and most of its subgenres. Definitely a sci-fi, horror, and comedy fan, too. I like stories that smoosh different genres together, too. But my go-to authors if I’m in need of inspiration are Holly Black, Melissa Marr, Ray Bradbury, Susan Cooper, Terry Brooks, Anne Rice, and Clive Barker.

Tell us a little about your latest book?
INTO THE FORGOTTEN FOREST was originally twice as long, and with a different title. I realized how massive the story was getting, and made the decision to do some book surgery on it. So now the second book will have the original title—UNDER THE WOLF MOON.

The first book in the series follows Oli and Xander Locklear as they start to discover that their world isn’t exactly what they thought it was.

What I keep seeing are these paranormal romance books where the main character is a human girl, and she usually ends up falling in love with a vampire, and usually ends up becoming one herself toward the end. And what I did was to make the trope a bit more interesting. Instead, the main character is becoming a monster, herself. She and her brother, both. And it’s about their journey to figuring out who they are, and who their family really is. But it’s also about friendship and betrayal and loss and a myriad of other things, including an evil queen, doors to other worlds, and other realities. There will be a little romance further on in the series, but it’s definitely not the focus.