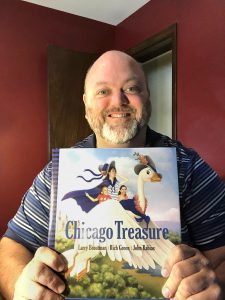 Tell us a little about yourself. Where were you raised? Where do you live now?
I was born in Chicago and grew up on the south side. In middle school, my dad’s job transferred us to Sioux Falls, South Dakota where we lived for almost two years. It was such a different pace and helped me form some friendships I still have to this day. We eventually moved back to the Chicagoland area and settled in the suburb of Tinley Park when I started high school. Tinley Park is where my parents still live today.

I live in Joliet, Illinois, a far southwest suburb of Chicago. I moved out this way in 2001 to be a bit closer to my job at the time. Over the years, I have gotten to know so many people from this area, and I like that small town feel even though it is a fairly large city.

My dog Annie is always by my side, and I have two fish in my home office. When I was five years old, I received a dog from my aunt and uncle for Christmas, one of my favorite Christmas presents of all time. She was rescued from a very poor living situation and turned out to be the best dog. I was obsessed with Mickey Mouse as a kid, which is no surprise considering I am still a massive Disney fan to this day. Since the dog was a girl, my parents convinced me to name her Minnie. Little did anyone know that five weeks later Minnie would give birth to a litter of puppies. Talk about the gift that kept on giving! Over the years, I have continued to have a rescue dog or dogs as furry family members. Annie was only four when I rescued her, and she recently turned sixteen. She is the sweetest girl and my buddy.

At what age did you realize your fascination with books? When did you start writing?
When I was a child, my parents enrolled me in one of those book-of-the-month clubs that were really popular at the time. In my case, they were all Disney books and collections of Disney stories. I was constantly reading them and trying to draw all the characters in them. I knew all those iconic characters and stories from the books long before I ever got to see any of the animated films. My love of children’s books just grew from there.

My indirect path to writing has come about from my background in illustration. I started trying to draw at a very early age and really got interested in computer graphics and animation over the years. Since I specialize in children’s themes, I found the Society of Children’s Book Writers and Illustrators and have been involved with them for several years now. I realized that I have some of my own stories ideas I would like to turn into books someday and have been working on writing and creating some book dummies of my own to pitch. Fingers crossed!

Who are your favorite authors to read? What is your favorite genre to read. Who Inspires you in your writings?
My favorite authors and genres have evolved and changes at different periods in my life. There was a time I was pulled into books that were about to become films. I would read them (and the entire series if there were more than one). At another point in my life, it was a self-help book on finances or health/fitness that was my go-to for making changes and rereading for reinforcement.
Recently I have been going back and reading some of the classics I never read growing up, books like “Treasure Island” and “Lord of the Flies.” I also have read a relatively new YA series: “Arlo Finch” by John August.

Lately my focus has been on reading all kinds of children’s books to stay current and inspired. I read the children’s book “The Day the Crayons Quit” by Drew Daywalt, and I absolutely love it. It is so clever and imaginative. It is a children’s book that is also written for the adult reading the book to a child as much as it is for the child.

As an author/illustrator, it is pretty much a requirement to read all the time. That may be even more true in the children’s book world, as you need to see what types of stories are being told, what styles of illustration are resonating with art directors and audiences, and so on. I try to make it a weekly routine to head to my local library and check out a handful of children’s books.

Being so involved in the SCBWI Chicago-Area Illustrators Network has afforded me the opportunity to meet so many amazing authors and illustrators. Forming a bond with some of them has really taken my love of their books to a new level. Matthew Cordell is high on that list. I even had the honor of getting a portfolio review by him several years ago. Now he is a Caldecott medal winner for his incredible wordless picture book, “Wolf in the Snow.” Another favorite of mine is Don Tate who has authored and/or illustrated several incredible books and is the kindest, most humble guy. I find that so inspiring. I have been very fortunate to take illustration courses by Lee White and David Hohn, both of whom have incredible careers in children’s books and illustrations. I have been mentored first hand by Terri Murphy and Janet McDonnell. Terri and Janet have flourishing careers in children’s books and have taught me everything I know about the children’s book industry and beyond. It is their generosity of knowledge that has had the biggest influence on me. I am forever grateful to them both.

Last, but not least, Larry Broutman, who brought me into his latest book project, “Chicago Treasure,” is a fascinating person and has the most generous spirit. I am so inspired by his collection of books, his kindness, his drive and, most of all, his friendship.

Tell us a little about your latest book?
“Chicago Treasure” is the most recent book I have worked on as both co-author and illustrator. The concept for the book came from author and photographer Larry Broutman. He has three previous books of photography. He woke up one morning with the idea of taking photographs of children and turning them into the main characters in classic storybook, fairytale and nursery rhymes. He contacted me about illustrating scenes around the kids.

I also worked on creating newspaper articles that summarized the stories and put a clever, modern twist on them, based on the kids featured in the images. We call those “Chicago Pretender” articles as they have a lit bit of reality and a whole lot of imagination in them.

In “Chicago Treasure,” our message is one of access and inclusion for all children, regardless of ability. That is a message I am very proud of, and the response to the book has been wonderful.

Please visit https://www.everythinggoesmedia.com/product-page/chicago-treasure to learn more about “Chicago Treasure,” read reviews, and pick up a copy.