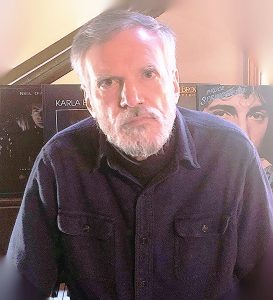 Tell us a little about yourself. Where were you raised? Where do you live now?
I grew up in Revere, Massachusetts—a working class city just north of Boston. I live in Georgetown, MA now—a much more rural area. Well it was much more so when we moved here 30 years ago (smile). I dropped out of Salem State University and finished my undergraduate studies at Harvard University Extension. Later I enrolled in graduate courses at Boston University before earning my Master’s Degree at the University of Massachusetts, Boston. I taught literature and memoir courses at UMass.

At what age did you realize your fascination with books? When did you start writing?
Perhaps earlier, but in the 6th grade Sister Mary Ellen (who played touch football with us in the schoolyard during recess at Saint Mary’s in Lynn) encouraged us to write a story in Stockton’s “The Lady or the Tiger” vein and I remember her liking mine and encouraging me.

Tell us a little about your latest book?
The novel is called “Visions of Johanna”.

I read a novel about a younger man and an older female artist and it hadn’t rung true. Though written by a well-established author, it seemed to me to be about a “pretend” artist. Of course, I could be dead wrong. Other folks were engaged and enjoyed it. But—with a certain level of arrogance—I thought, I knew a talented and brave artist and might be able to share the experience of what that artistic life was like more effectively.

Then I thought, “Why hadn’t that relationship worked out?”

Independent of this, over the years, I had tried several times to write a story about a dear friend who tragically lost her life while only sixteen-years-old. And I eventually finished two short stories based on her. She had been hit by a drunk driver, abandoned on the side of the road, and found dead by her older sister who went out looking for her after she hadn’t returned home from a trip to the neighborhood convenience store. I was numb for weeks and much longer. Years later, only two main images of my friend remained: one of her dressed in a stylish suede leather fringe jacket of the era with her sparkling brown eyes and luminous smile on the Friday she left for that weekend trip to Maine—the one I saw. And the other: her lying by the side of the road, alone, waiting for her sister to find her—the one I only imagined, yet could never rid myself of.

I didn’t know how to deal with that pain. There were really no such things as a grief counselors in “those days” and a man (even though I was only sixteen myself)—especially in my neighborhood—was expected to suck it up. It wasn’t until I started writing the novel that I understood that these events might be related. That perhaps one of the reasons my relationship with the artist didn’t work out had something to do with this traumatic event.

Finally I wondered, “Why is music so damn important to you?”