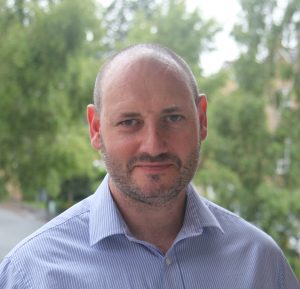 Tell us a little about yourself. Where were you raised? Where do you live now?
I am a native of Belfast, N.Ireland. I have lived briefly in the US and have travelled extensively throughout Europe and America, mostly through my work as a business and management consultant. My educational background was more Maths and Science focused rather than the Arts or Literature.

At what age did you realize your fascination with books? When did you start writing?
I’ve always been a bit of a daydreamer and for a few years now I have thought (more joked) about writing a book. So, when I started to think about some of the questions that the premise behind Reliance threw up, I thought “Okay just do it.” So, I did. English was never my thing, being partially dyslexic, Maths and Science had always been my field. But once I got into it, I found writing to be extremely therapeutic and relaxing. Now I find myself with more ideas than my poor little fingers can keep up with.

Who are your favorite authors to read? What is your favorite genre to read. Who Inspires you in your writings?
I discovered an independent author a few years ago called D.J Molles. I was doing a lot of travelling with work at the time and so listened to his post-apocalyptic audiobook series The Remaining, on my journeys.
My preferred genre would be dystopian/apocalyptic or thrillers.
When I first started out on my writing journey I came across a podcast by Andrew J Chamberlain called the Creative Writer’s Toolbelt. It was an excellent series with technical advice and interviews with people from across the industry.

Tell us a little about your latest book?
My debut novel, Reliance, is a dystopian/apocalyptic tale exploring the fragile nature of society’s reliance on technology and the electricity that powers it. It tells the story of four main characters and their experience of the rapid collapse of society following a plausible, albeit exaggerated, space weather event, which causes a prolonged and global power cut. Rather than invading aliens or mindless hordes of zombies, as you would see in a lot of apocalyptic stories, Reliance looks at the effects that are closer to home and which many people wouldn’t even consider. If the power is off for a day or two it’s an inconvenience, but what if it’s off for longer, a week? A month? How long would it need to be off before things started to fall apart.
I started research for Reliance in mid-2019 and put pen to paper that September. The first draft was completed in April 2020 and the book and audiobook released at the end of July 2020. The book has since been translated into Spanish, with an Italian version expected to be released in Oct 2020.
Work on book two of the Powerless Earth series started in September 2020 and is expected to be released in the Spring of 2021.