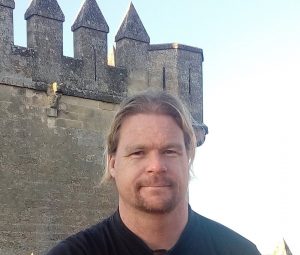 Tell us a little about yourself. Where were you raised? Where do you live now?
I was born and raised in the Czech Republic, but now I live in Spain. I’ve lived in four other countries: Canada, Portugal, Bulgaria, and Turkey. Since we move around a lot, we don’t have any pets.

At what age did you realize your fascination with books? When did you start writing?
I started reading and writing as soon as I learned my letters. If I remember correctly, my first story was about a talking dog.

Tell us a little about your latest book?
It’s called Celts and the Mad Goddess, and it’s the first installment of The Deathless Chronicle. It tells the story of a young Celtic woman called Rawena, who falls into the claws of the rat-goddess Pandemia. The goddess schemes to annihilate humans to preserve other animal species. She lets Rawena live but turns her into a pawn in a mad game. Rawena fights to defy Pandemia while running from her own tribespeople who suddenly see her as their enemy.
It took me only a year to write this book, but it’s based on a saga I worked on for nearly a decade in my younger years, and later abandoned.