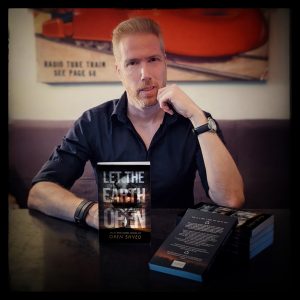 Tell us a little about yourself. Where were you raised? Where do you live now?
I’ve been a creative director and game designer for many years. Went through a long list of startups in the gaming, VR, and AR worlds (some were mine, some weren’t).
I had the privilege of writing a lot for games and a lot of other creative projects, but this was my first time writing a novel.
Born and raised in Israel. No pets, just one semi-feral ten-year-old child.

At what age did you realize your fascination with books? When did you start writing?
I was reading from a fairly early age, but only really got into it when I started playing D&D and about age 10. It was the 80s, so the first books I really got hooked on were the Dragonlance chronicles.
Started writing as a teenager. Mostly short fantasy stories, as one would expect from a geek such as myself. After college, I went through a long list of startups in the gaming, VR, and AR worlds (some were mine, some weren’t), where I had the privilege of writing for a lot of games and other creative projects. This was my first time writing a novel, which I started writing in 2020

Who are your favorite authors to read? What is your favorite genre to read. Who Inspires you in your writings?
A lot of them, recently, I think that Andy Weir really helped me feel comfortable whenever I spice up my writing with interesting trivia and scientific facts that I know would excite my geeky/nerdy readers.
I’ll read any genre, as long as the story sparks my interest (although, I usually gravitate to Sci-fi)

Tell us a little about your latest book?
“Let the Earth open” is the first in a sci-fi/thriller trilogy. It was inspired by a south-Korean show that I saw, which reunited people with a VR version of their departed loved ones. And since I’ve always worked with cutting-edge interactive technologies, I wondered what it would look like If an AI gathered all of our data and created these kinds of scenes for us. Where would that lead us? Where would it lead the AI? That was when I decided to incorporate AI into my writing so that whenever the AI character in the book spoke, it was a real natural language algorithm writing its lines, thus creating a dialogue between myself and the machine.