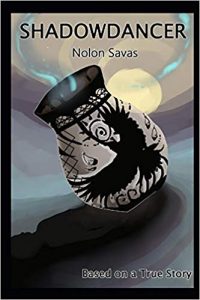 Tell us a little about yourself. Where were you raised? Where do you live now?
I have been a journalist, soldier, enumerator, roughneck, roustabout, prospector, blaster, doodlebug, security guard, and a convict librarian in a New Mexico prison. Fact is, I’ve done many more jobs just to stay afloat than the ones mentioned. I worked the deeprock mines after graduating high school. I joined the Army to escape Post-traumatic Stress Disorder, a diagnosis I would not learn of until I was sentenced to a halfway house for six months in 2004. I weighed 110 pounds after the ravage was done. I started writing again while a resident in a homeless shelter following the halfway hotel experience, placing it aside to take care of my mother in her dying days. How long did it take to write “Shadowdancer”? About forty-two years. It cost me a great deal more to research the substance of the book than the reasonable cover price to buy it.

At what age did you realize your fascination with books? When did you start writing?
I started reading by age five to escape the madness of home life. My father was a veteran of three wars and my mother was a jitterbug with firecracker blood. By age twelve I was clearing out entire sections of the public library with reading interests covering every topic but organized sports. By the time the folks stopped with their knock-down-drag-out free-for-all performances, my psychopathic brother took over in the beatings department. Like they say, another day in paradise. I went underground as a miner to finance college at the University of Utah. When that money ran out I joined the Army and became a combat engineer. It was the United States Army or the French Foreign Legion. I took the path of least resistance.

Who are your favorite authors to read? What is your favorite genre to read. Who Inspires you in your writings?
William Faulkner, Flannery O’Conner, John Steinbeck, William Shakespeare, Joseph Conrad, the Holy Bible, Gilgamesh, you get the idea. There’s not too many contemporary writers I have read, although I helped Christopher Moore with his second book, “Coyote Blue”, and currently work with an autistic author who publishes historical fiction, Bonnie Barrigar. She’s quite an imaginative writer.

My favorite genre, or rather sub-genre is the one I write in–Southwestern Gothic. Never heard of Southwestern Gothic? You will. As an abbreviated explanation, Southwestern Gothic takes most of the traditions of Gothic literature: mystery and fear, omens and curses, dreams and nightmares, supernatural or paranormal experiences, villains, and emotional distress, placing it in a southwestern setting. Because I am writing in first person narrative, and because all of my books are based upon a true story, further lends to reader involvement. I am the anti-hero you would prefer to sit next to in a dinner party.

Tell us a little about your latest book?
“Shadowdancer” is a journey of discovery. Our protagonist ventures into a remote Native American cliff dwelling and takes some souvenirs–desiccated corn cobs from a stone granary. From the start strange things happen, bad things that only get worse with the passage of time. Our protagonist returns to the Silver City, New Mexico area after losing his geoseismic job in Oklahoma. A strange letter arrives in his general delivery box days after his arrival. The letter, from an elderly man our protagonist doesn’t know, says that there are gold and silver deposits in the Bootheel of New Mexico worth investigating. A map is included. What the protagonist can’t explain is how this elderly letter writer knew of him at all. Off to the sticks goes the protagonist and in doing seals a course of events that would change his life forever…