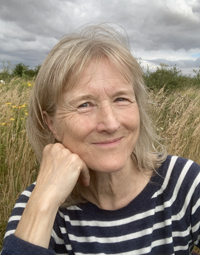 Tell us a little about yourself. Where were you raised? Where do you live now?
I was raised in Loughton, a suburb of London. The house I was brought up in was first built as a monastery in the 14th century. It was spooky but such fun for a kid. It was all rather bohemian; my family were all actors; my mother was stunning and a fabulous hostess. She was the star in my father’s firmament. I was the youngest of four and went into the theatre, not because of passion, but because I was terrible at school and it seemed the easy path. I married an actor, of course, and now have a wonderful family. We live on a beautiful sea inlet called Hamford Water, on the North Essex coast. We don’t have pets anymore because our dog cost us so much; she swallowed stones for fun and had to have them removed!

At what age did you realize your fascination with books? When did you start writing?
I was late to writing because I was late to reading. I am dyslexic, which wasn’t discovered until I was in my 40’s. I have always loved story in any form; in the theatre, where I worked for some years and in the sculpture I developed at art school. I was in my mid 40’s by then. I only discovered a love for writing when compiling my diseration. My tutor said he thought hypothesis was rubbish but the writing was excellent! Spell check and the self belief that I began to develop at university changed my life. When opportunity arose I started attending writing workshops. I haven’t looked back.

Who are your favorite authors to read? What is your favorite genre to read. Who Inspires you in your writings?
I am ashamed to say that I have no favourite author, but many books that I love. To name a few: Godrick by Fredrick Beuchner, Midwinter by Fiona Melrose, Painter of Souls by Philip Kazan and more recently, Open Water by Caleb Azumah Nelson. Each one draws you in to the story of thier protagonist and immerses you in thier world. I take inspiration from each one; Beuchner’s ability with language, Melrose’ characters, Kazan’s ability to paint a picture and Nelson… his way of writing is so brave, he breaks all conventions and in so doing draws you in. Generally I tend to read historical novels because of the richness that the past often offers and there is always something to learn.

Tell us a little about your latest book?
Kitty Canham, my debut novel, is based on real events that took place in our little English backwater. She was born in 1720 to Yeoman farmers. At twenty five she married, but dissapeared two years later. I cannot say how she reappeared, that would be too much of a spoiler. I was surprise how the fiction unfolded after I asked myself one little question, ‘Why didn’t she marry until she was twenty five?’ And so I began to write a story that took eighteen months to complete. It begins in late summer as the season is changing. Little does Kitty know how her life is changing with it. This is the story of a woman who fights to make her way in a world which is pitted against a such a woman. Sometimes she succeeds and sometimes she fails as the tide of convension and the difficulties of the age, pull her into thier wake. She travels through loves, tragedies and the vagaries of London society, before she finds her happiness, but it is not without great cost. The moral dilemma she faces all but destroys her and her happiness is short lived, but somehow, the love she has known goes on.