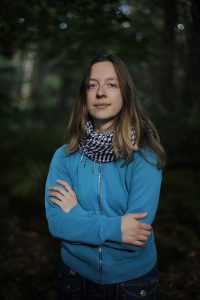 Tell us a little about yourself. Where were you raised? Where do you live now?
I was born and raised in the Central Belt of Scotland where I still live with my partner and three gerbils. By day, I walk around in bogs and look at poop. At night, I torture my characters and lay waste to half of the country. When I’m not writing, I can be found reading or playing Worms on my PlayStation.
I’ve just published my debut trilogy, The Faction War Chronicles, this year, which contains three novels and a novella all based in a dystopian Scotland.

At what age did you realize your fascination with books? When did you start writing?
My first publication was in an anthology when I was about ten years old. It was a story about a woman who lost her husband at sea then threw herself into the water when she realised he was never coming home. Several more short stories followed during high school and I started to notice something: people die in my stories.
ALL THE TIME.
They’re beaten, shot, stabbed, eaten and it has not improved since I’ve expanded into novels. There is a lot of darkness and death in my debut trilogy.

Who are your favorite authors to read? What is your favorite genre to read. Who Inspires you in your writings?
I recently re-read one of my favourite book series–the Anita Blake Vampire Hunter series by Laurell K. Hamilton. It took me a while since there are about twenty-odd books in it but I noticed something interesting. Little snippets and phrases from those books have turned up in the books I write, though not on a plagiarism or copyright-infringement scale, of course. Laurell K. Hamilton has definitely been a strong influence on my writing, particularly as her books get a little erotic, too!
I like to read science fiction and fantasy but I’m quite open to any genre. I have a Kindle with hundreds of books so I can easily read romance one day, dystopian another then some kind of epic fantasy. I love them all.

Tell us a little about your latest book?
My debut novel, Captivity, which is the first book in The Faction War Chronicles, has been two decades in the making and started out from a dream I had as a teenager. In my dream, all the adults had fled the country, leaving the teenagers at war with each other and they split Scotland into factions.
Bit of a weird dream for a thirteen-year-old.
Obviously, a whole country version of Lord of the Flies wasn’t believable so the story has developed over the years into what it is today–a tale of Anita Carmichael’s search for the truth about who killed her sister and started a war. If you like a woman who can handle a gun, fast-paced action and a dystopian Scotland then check out Captivity. It’s for adults due to its strong language and explicit content (including violence and sex scenes). I hope you enjoy it!
You can buy it here: https://books2read.com/u/bPKkel