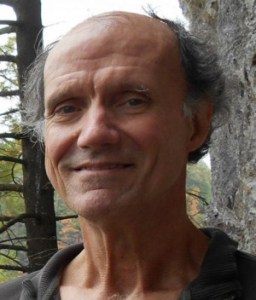 Tell us a little about yourself. Where were you raised? Where do you live now?
I was born and raised in Mason, Ohio, which is within the Greater Cincinnati Metro Area in the southwest corner of Ohio. I have settled in West Chester, Ohio, about 10 miles distant. I enjoy traveling across the US, and have detailed camping trips across the country on my travel blog American Locations: https://mikesherer.org. I especially enjoy long hikes in the wilderness while on these trips. I have published 3 novels, 4 novellas, and 20 short stories, plus 1 screenplay that was produced into a movie. It was released direct to DVD & now is available on Amazon Prime.

At what age did you realize your fascination with books? When did you start writing?
The first books I read in my pre-teen years were science fiction. That’s all my older brother ever read, so they were laying around. I have since broadened my range to all kinds of fiction, especially horror, fantasy, and suspense, and nonfiction, especially history and science. I began writing song lyrics in my teen years. I progressed to short stories, screenplays, and finally novels.

Tell us a little about your latest book?
In my paranormal suspense novel ‘Souls of Nod’, published by Breaking Rules Publishing, five members of a soul family gather to carry on a conflict that has been repeated since the dawn of time. One of them will murder another member of the group, and there is seemingly nothing any of them can do to stop it from happening. It is app. 67,000 words. In 2010, Hester has recently married Paul and moved into the house he previously shared with his former wife Flo, located in a suburban Ohio neighborhood decimated by the real estate crash. Many of the houses stand empty, and Hester has encountered ghosts in some of them. Paul scoffs, but neighbor Chanti and husband Clay have seen them, too. Hester learns from them and others about violent deaths that have happened on this land that had once been a prosperous farm, killings involving people who seem strangely familiar. Chanti tracks down Millie, an old woman who appears to know what is going on. Millie tells her about a soul family of the five ancient elements: fire, air, water, earth, and the void. In each incarnation each member of the soul family can be either man or woman, husband or wife, brother or sister, father or daughter, mother or son, or totally unrelated, or any combination of these. No matter how they are incarnated, each generation the five souls are drawn together to carry out the violence they seem destined to commit. In this latest incarnation the gathering is complete when Paul’s ex-wife Flo returns. Will they continue the age-old cycle of violence they seem doomed to commit? Or will this time be different, allowing the soul family to advance on its path to Nirvana?