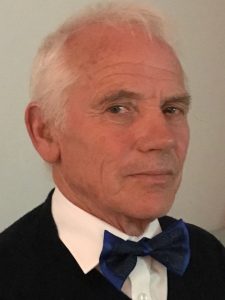 Tell us a little about yourself. Where were you raised? Where do you live now?
Michael R D James was born in South Africa and lived in Cape Town for 16 years. He travelled to England and was educated at Grammar School, Exeter University (B.ed) and Birmingham University (B.A and M.A. in Philosophy). He moved to Sweden in 1979 and has lived there for 38 years, taking his doctorate at Uppsala University in 1987 in Kantian Philosophy. For the past 24 years he has been lecturing in the International Baccalaureate Program (IB) and teaches the subjects of Philosophy, Psychology, and Theory of Knowledge at Sigtunaskolan Humanistiska Läroverket (the Alma Mater of Olof Palme, the present King of Sweden, Curt Nicolin, Peter and Marcus Wallenberg and Carl Bennet) He introduced World schools Debating into Sweden and was the Swedish Schools team Manager between 2008 and 2013, coaching the team at the World Championships at Qatar and Dundee. His trilogy “The World Explored, the World suffered” is both an attempt, firstly, to bring student life into the arena of everyday existence and also, secondly, an attempt to introduce the curious to the study of Philosophy. He enjoys reading, travelling, exercising, listening to music, being with his family, and walking his dog. He currently lives in Uppsala.

At what age did you realize your fascination with books? When did you start writing?
Agatha Christie was my favourite author when I was ca 12 years old.

Began writing and publishing poetry when I was 19

Who are your favorite authors to read? What is your favorite genre to read. Who Inspires you in your writings?
Larence Durrell, Shakespeare, Dickens, Hardy, Laurens van der post, V S Naipaul:– favourite authors.

Serious literary fiction and academic Philosophy are what I read most

Tell us a little about your latest book?
The World Explored, The World Suffered: The Exeter Lectures is the first part of a trilogy and is a work of philosophical/ educational fiction. Its fictional component is composed of a middle-aged Romeo-Juliet drama which ends with two deaths in Venice and a youthful adventure that takes Robert, the narrator from trauma in South Africa to a teacher training institute in England where he discovers Philosophy and befriends an alcoholic lecturer who had once studied under Wittgenstein.