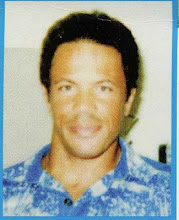 Tell us a little about yourself. Where were you raised? Where do you live now?
I grew up in Richfield, Minnesota. Adopted at 2 weeks in life, in February of 1965, I became the biracial son of a university professor and a social worker. Mom came from New York, dad came from Hannover, Germany, and they came for me one day with their 3-year-old daughter.

Records I was privy to at 18 suggest my biological father had some interest in creative writing. I never met him. My mother, who I did know for almost 30 years, was a writer. She was an ESL teacher who wrote extensively about the places in which she taught mainly Egypt and Saudi Arabia. Between the two, some ink must taint my blood. I live now with my wife in St. Louis Park, Minnesota.

At what age did you realize your fascination with books? When did you start writing?
As a kid I was always encouraged to read. When I was 7 or 8, our family had this cabin in Bay Lake Township. My mom, my sister and I would spend summers there. Mom would take us out to the road to gather reading material from the bookmobile. Later, I remember a phase I went through in which I voraciously read elementary-level biographies. I covered everyone from Martin Luther King to Booker T. Washington. College was when I read all the classics.

I’d guess I first began writing in college. It was not until my sophomore year that I declared English as a major. I did not want to teach, I wanted to write. I took dozens of poetry and creative writing classes in my years at the University of Minnesota-Duluth. I was prolific; I had to be, and churned out some of the worst poems I’ve seen.

Upon graduating in 1989, I continued writing poetry, essays, and short stories. My first short story, based on my experiences working in a health club, was published in 1998. I kept writing, editing, re-writing, and tightening my craft. After numerous rejections from traditional publishers, I decided to go indie in 2011. My first novel, The Orthodoxy of Arrogance, came out in 2013.

Who are your favorite authors to read? What is your favorite genre to read. Who Inspires you in your writings?
I enjoy the fierceness of Bukowski. I love his detail, his use of senses. Laura Hillenbrandt, author of Unbroken, inspires me. Her research is incredible. The writing about real events is told with such passion and description. I am inspired by Twain. Huck and Jim were in the back of my mind as I wrote, particularly, my latest historical fiction novel. I’d remember how they rafted down the Mississippi discussing and gauging the racial tension. My novel has a scene on a swift boat. A black, disabled Vietnam vet, and his biracial friend drift past changing attitudes toward race, the war, and disability, in the 70s.

Tell us a little about your latest book?
My current novel is titled Agent of Orange. One day, at my former “career” in Medical records, I was for some reason thinking of the line from Apocalypse Now “I love the smell of napalm in the morning.” I am fond of word play, and said the line over in my mind. I wanted to relocate it, to after mass it, and distance it from that horrific weapon. I came up with “I love the smell palms make when they sway in the morning.” The story kind of grew from that line, that idea, the location of Palm Beach, Florida.

The novel grew to involve the Marine Corporal, Chauncy T. McClarren with the baggage of a disabled friend (who was his Sergeant) and a goddess-like woman who only his friend suspects is a fugitive. The story has grounding in my own life as far as being biracial, having known my mother, and having never met my black father who was killed in 1997.