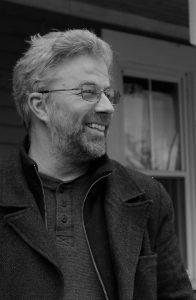 Tell us a little about yourself. Where were you raised? Where do you live now?
I was raised in a suburb of Oakland, California in the 70s and 80s. It was a great place to grow up. Our street was like a little United Nations, so I got exposed to different cultures and beliefs from a very young age. Now I live thousands of miles away in the Maine woods, with my wife, my cat, and my two rambunctious dogs.

At what age did you realize your fascination with books? When did you start writing?
My fascination with books started at a very young age. I read both Huckleberry Finn and Tom Sawyer when I was in first grade. I probably started writing back then, but I don’t have anything from that time. I remember vowing to write a monster novel with my friend Richard, but we never did it. We were too busy whipping apples and playing detective.

Who are your favorite authors to read? What is your favorite genre to read. Who Inspires you in your writings?
I don’t have a favorite genre anymore. It used to be fantasy and science fiction, but now I read a little more widely. Stephen King, David McCullough, Michael Connelly, Guy Gavriel Kay, Jane Yolen, Mary Stewart. I also like reading about interesting people who aren’t necessarily writers, like Jay Blades the guy behind the hit show “Repair Shop.” I want to read about a little bit of everything.

Tell us a little about your latest book?
“A Place to Run Free” follows the journey of Jake Phillips through the afterlife of pets. Suspended from school, Jake sneaks out of his room and heads down to his spot near the river. A bad decision and some thin ice plunges him into freezing water. He wakes up in a vast forest populated by dogs. Jake discovers that the afterlife isn’t the one promised to him in church. Something dark lurks in the deep shadows among the trees, stealing away dogs. Jake is determined to find out what is taking the dogs, and rescue them if he can. He’s helped along the way by the animals he meets – Blue, a steadfast horse, a clever rat named Azrak, and many others. Jake’s journey leads him through deep forests and golden grasslands, searching for the truth behind the missing animals. It’s a journey of high adventure, tragedy, loss, and ultimately, love.