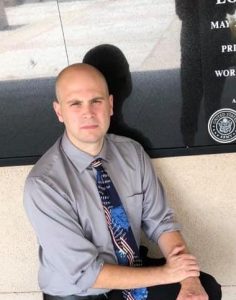 Tell us a little about yourself. Where were you raised? Where do you live now?
Well, from pre-school all the way through high school, my parents transferred me about a half dozen times to various schools on Chicago’s northside. Following, my three years of college were also Chicago based, and when I started producing films, that took me all over the Chicagoland area. At the end of the day, I never really got attached to one specific, close-knit neighborhood, but certainly the north shore suburbs of Chicago are “home.” I still spend a significant amount of time there, however I’m constantly back n’ forth to Las Vegas where I also have friends and odd jobs I take on.

At what age did you realize your fascination with books? When did you start writing?
That’s an easy answer: end of 4th grade.

Now, let me back up by saying I couldn’t read until the age of 10. In fact, when I started 4th grade, I only recognized words, but was unable to comprehend a sentence. You can imagine how God awful I was on weekly spelling tests? Well, in 4th grade we had to read 20-mintues each night which was terrifying when my Mother first told me this the summer before the school year began.

Well, one of the tricks that had a big influence on me was that we could choose what we wanted to read for homework. The 20-minutes wasn’t “assigned” reading. Inevitably, around September and October, myself and fellow students were grabbing books because we thought they were cool. Total “judging a book by it’s cover.” Eventually, the entire class began trying to one-up each other in what we were reading. No joke, by the end of the year, there were three kids in the class all reading “To Kill A Mockingbird” just because someone got it in their head that reading “To Kill A Mockingbird” was the cool thing to do. And, I’m sure none of them actually knew what was going on in the book because of the way it’s written and the subject matter, but I digress… by the time April and May came around, the mandated reading was something I got use to, but luckily, with the release of a new “Star Wars” movie… capitalism at its finest… those thick “Star Wars” novels became a thing. Now granted, I barely understood what I was reading at the time, but who cares; it was “Star Wars” and the paperbacks were thick. Today I wouldn’t be caught dead reading one of those “Star Wars” novels, especially since Disney dissolved the alternate universe, but those “Star Wars” novels inevitably made Borders Books “cool.” That was where the fascination of books started and sorta ingrained itself into me. Flash forward to Junior High School and High School, I was always reading something, often to the ire of other students, or even teachers. I had a taste for contemporary events because of 9/11, and eventually modern politics… a lot of my high school teachers didn’t care that I was into that stuff, but there were a few that were and encouraged it.

Now, writing professionally didn’t come about until much later; specifically 2016. Prior to then I had written countless papers for college, and in the film world often wrote up screenplays, or lengthly emails, legal drafts, etc. Writing never intimidated me and I was comfortable doing it but I never had an avenue to work myself into writing books. Luckily, and unfortunately, a job opportunity came along to write a booklet on film and I jumped on it with enthusiasm. It did result in a horrific experience two years later, but it opened the door for me to incredible opportunities that eclipsed my own authorship.

Who are your favorite authors to read? What is your favorite genre to read. Who Inspires you in your writings?
My impulse answer is to say Ron Chernow, with the disclaimer that I haven’t read all of his books yet; I got two left. I’ve read almost all of Bill O’Reilly & Martin Dugard’s “Killing” books, but outside of that I’m not devoted to authors in the sense of that I need to read each and every one of their books. Certainly I’m much more likely to read a book based on if I liked his or her other material, but with the exception of Chernow, I’ve never made a point to do that.

For the record, film directors I’ll track down every movie with religious fervor, but never really did that with an writer.

My favorite genres are film studies, film history and American history. (Big surprise, right?) Predominantly non-ficiton, but every couple months I’ll read a fiction book just to mix it up.

As far as the inspiration goes… on the one hand, would it surprise you if I said Ron Chernow inspired “Rev. William Netstraeter?” Chernow’s biographies are told with such fluid and rich details that even what might appear mundane, is actually fascinating.

On the complete opposite side of the coin, the inspiration for the film books comes from doing the opposite of what I’ve other writers do. A number of the film books I’ve read are downright condescending with the usage of overly-affluent language. These high brow so-called academics get paid to write these prestigious looking filmographies that are rife with petty remarks AND, some are horribly written. I won’t name who it was, but Yale put out a book that had a number of blatant inaccuracies and some of the Amazon reviews were calling out the author for the errors. I died laughing when I realized how glaring of mistakes they were. You’re Yale! You’re an Ivy League school that couldn’t bother to get a proof-reader to check these things?!? Anyway, I want my film books to be down to Earth, something that anyone can read and follow along without getting confused and not feel like the author is smarter than the reader.

Tell us a little about your latest book?
There’s a metaphorical blank stare on my face trying to think how to answer that. As I got more comfortable with writing, and needing to overseeing the marketing and distribution of books, I started taking on other “publishing” endeavors. Also, books tend to have an elongated release period where you’re still marketing the book years after it comes out. Not to mention, toss in a pandemic which altered the schedule and it becomes a mess.

The latest endeavors was finally getting the audiobook for “The Films of Steven Spielberg” in the can and slated for a summer release. That book released in March 2018 to a cavalcade of problems that, quite frankly, made for the worst experience of my professional career. The former publishers caused irreparable damage that was still being discovered even as late as a few months ago. The process of doing the audiobook helped us go back and really restore the book to the way it was supposed to be upon release, and in a way gives “The Films of Steven Spielberg” a long overdue re-release, now with all the editions available.

Otherwise, I have three books that are “in production” right now… one on Ron Howard and another on Sam Mendes. The other book is an autobiography that I was the ghost-writer for about my best friend and his years as a roadie for heavy metal bands. Meanwhile, I have a potential fourth that I’m teaming up with Olivia Murray (author of “Abortion v. Slavery”) to do something on American history. I honestly don’t know which of these will arrive first, but each month they get closer to the finish line.