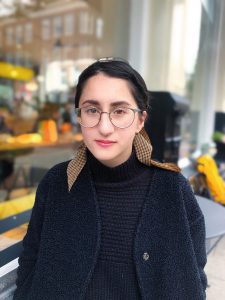 Tell us a little about yourself. Where were you raised? Where do you live now?
I was born in Istanbul, Turkey but I currently reside in Amsterdam, the Netherlands. I grew up in Istanbul living with my family until I went to Denmark to study for a year at Roskilde University. Then, I moved to Groningen, The Netherlands to finish my studies in English Language and Culture where I focussed on Women studies. I love animals but I do not have any pets as I do not have a plan on where I will live or which country.

At what age did you realize your fascination with books? When did you start writing?
My Mum is an avid reader who then passed onto me. I would constantly read books in school between classes and would go home to read more in my free time as I did Ballet at the Istanbul Conservatory and gymnastics in a total of 16 years. In high school, I continued my piano lessons for ABRSM but I still had time for reading books. I had no plans on what to study at university but writing and reading have always been a part of me since childhood. That is when I decided to study English Literature and discovered my passion for poetry. I probably was writing as a kid but I started writing properly when I was 14. We all had a time where we were reading fanfiction right? However, I was introduced to Tupac Shakur’s poetry by Jameson Kismet Bell during my first literature studies in Istanbul. From there on, I started writing poetry. The last year of my studies in English Literature at the University of Groningen, Dr A.C. Hoag helped me immensely to understand the literature of migration better. That encouraged me to compose more works in the nonexistent world of exile Literature.

Who are your favorite authors to read? What is your favorite genre to read. Who Inspires you in your writings?
I am a classic literature reader as well as experimental and post-modern works. I also am fond of gothic literature and historical fiction. I have several favourite authors that I religiously read, so it is quite challenging for me to make a selection. But I will always read Emily Dickinson, Marie de France, James Baldwin, and Arthur Conan Doyle. I can list so much more but these are the ones that I constantly end up studying. They inspired me to arrange the segments in my first poetry book. Everything I had studied so far from Ancient mythology, Old English, to the Modern English literature, being different and feeling melancholic were disregarded and were seen as weak in nature. I desired to give the people, who were outcasted were seen as “too feminine or weak”, a voice to be heard. I hope the readers can feel some connection to these anonymous characters.

Tell us a little about your latest book?
I would say it is mostly about displacement, feelings of nostalgia, and being a woman. The poems are about my personal experience but also about the personalities who felt like outsiders in a society they found themselves in. I recognised their sufferings and it was a shame no one addressed them in an emphatic light. Only a few writers attempted to portray them accurately without constant whining. Around the time I moved abroad, there were similar feelings in my life when I was hopeless. In my poetry, I want to cast a light into their emotions rather than defining who they are or what they are. Hope can only be found when we encourage each other to discover the light within the desperate times.