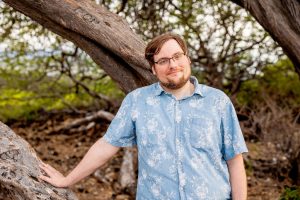 Tell us a little about yourself. Where were you raised? Where do you live now?
While I was born in Ft. Wayne, IN, my family moved to Fairview, TX when I was six months old, so I definitely don’t consider myself an Indiana resident. Honestly, I don’t consider myself a Texan either, as we moved to Colorado when I was only eight and the only characteristic I keep from my Texas youth is occasionally saying “y’all” to people. So while my early years were in Texas, my formative years were in Colorado. I have my own place in Centennial, CO right next to Southglenn Mall. It’s a wonderful location. Yep, my roommate and emotional support animal Lyra, a 3-year-old female pearl cockatiel. She’s so sweet and cuddly, but very timid and really only likes me. She is slowly starting to warm up to a few of my friends, though!

At what age did you realize your fascination with books? When did you start writing?
Pretty much right away. I read so many picture books when I was a kid, then kept moving up and up as I got older. I remember constantly going to my library in high school and just checking out whatever books looked interesting in the sci-fi and fantasy sections, and let me tell you, there were some real bangers there, as well as some stinkers of course. The inspiration that I got just from opening up your standard dorky fantasy book and seeing the obligatory world map was wild. I’d see something like “Northguard’s Keep” and I’d be like “Whaaaaat?! Who’s stationed there? What are they protecting? Who are they defending against?” So many questions! I miss that wonder I felt back then sometimes.” When I was six years old I won a contest at my school where we had to finish the sentence “It would be great if…” and I wrote a poem about how it would be great if I were an author. Since then I’ve dabbled in a few smaller writing projects, before seriously starting when I was thirteen. One of my first big stories was the first of what would be many versions of my story Megazoic, of which the final version ended up being my first published book. You like dinosaurs? You like sci-fi? How about them both together? Go check it out, available on Amazon or my website. Cheap plug!

Who are your favorite authors to read? What is your favorite genre to read. Who Inspires you in your writings?
I really enjoy the natural wonders described in fellow Colorado author T.A. Barron’s books, and the old school style fantasy he writes around them. I also enjoy the world-building of J.R.R. Tolkien, the wild sci-fi concepts of Michael Crichton, and the creativity of Greg Farshtey’s young reader books for various LEGO properties such as BIONICLE and Exo-Force. Also I know it’s cliche, but come on, J.K. Rowling’s plot and characters are amazing. There’s a reason her books are as popular as they are. Sci-fi and fantasy, particularly those aimed at younger audiences. While there are plenty of wonderful books for adults, I tend to find them more dry and lacking the wonder or fun of books for younger folks. I also really enjoy books with a good sense of humor. About the only non-speculative fiction books I read are comedy books. If there are books that combine both though, those are my absolute favorite to read. As well as the aforementioned authors, I get inspiration from all sorts of sources such as movies, video games, and television. I particularly like works with good production design, and have a soft spot for those more “toyetic,” if that makes sense. My friend shows me these Japanese shows with people in suits fighting each other with crazy weapons clearly designed to sell toys, and I quite enjoy them. More than anything though, I’m inspired by my friends and family who support me the whole way and work so hard to help me accomplish my dreams. This isn’t a solo game.

Tell us a little about your latest book?
I have a book coming out August 16th, 2022 called Teslanauts. It’s a young adult sci-fi that takes place in the early 1920s after the world is still reeling from the effects of WW1. Seventeen-year-old Raymond Calvert learns his father, missing in action since the war, worked in a secret government organization led by Nikola Tesla that helps the world in the shadows using advanced electrical dieselpunk-style technology called volt-tech. Ever since the war showed the horrors humanity was capable of, the Teslanauts keep their technology secret, and erase the memories of those who learn of it that aren’t part of the organization. Raymond joins the organization in hopes of finding his father, getting involved in a world full of mechs, automated machines, disintegrator rifles, and lightning-armed biplanes, just as a new volt-tech organization formed from the remnants of the defeated Austro-Hungarian Empire makes itself known. Called the Oberschock Federation, they are financed by a mysterious American benefactor and plan to restart the war to regain their country’s glory, but the benefactor has their own plans for them. Raymond learns that his father might have had something to do with Oberschock, and rushes to learn what happened while the Teslanauts do everything they can to avoid war breaking out across the battered world once more. This book is based off an idea I’ve had since I was in college, and I’m thrilled that it’s the next idea I’m showing off to the world after my previous Megazoic books. It’s the first of a five-part series, and I can’t wait to show it to y’all. There, see? My inner Texan has resurfaced once more.