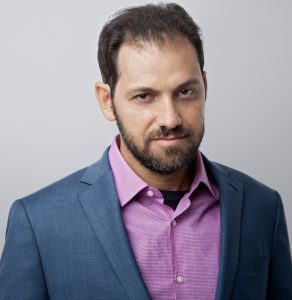 Tell us a little about yourself. Where were you raised? Where do you live now?
Astrology may be bogus, but, for what it is worth, I definitely have a bit of that Gemini mercurial spirit. I’m a creative type, of course, who feels comfortable expressing himself in a wide array of mediums. I’ve worked in standup comedy, fiction and poetry writing, film making, radio, acting, educating, to name just a few. Expressing myself has always been very important to me, perhaps because I was bullied for doing so as a kid and often discouraged as a bit of an outsider.

I was born in Queens Hospital. Grew up in Queens when young, and then Long Island, the Jericho area. I lived in Ithaca, when I went to Cornell, and Los Angeles for a year, working in film production, and I’ve traveled quite a bit. All that being said, for the better part of my adult life I’ve lived in the NYC area and I consider myself to have the rhythms and styles of NYC in my blood; to embody that kinetic energy; to sort of be that weird melting pot of different influences and cultures. New York City definitely has its drawbacks, but, then again, would
any other place equally feel like home?

At what age did you realize your fascination with books? When did you start writing?
I had an English teacher in High School who was very inspiring. He was totally outside-the-box. On Halloween we gathered in a circle and he read us Edgar Allan Poe in the dark with a flashlight under his face. He encouraged us to be creative and would show us strange movies and then do odd things like put on the fans all over the room and then spray us with flour–so that the whole classroom was covered in powder. He broke rules. He didn’t care what others thought of him. I liked that about him. I came from a home and a culture that was very repressed. Literature symbolized rebellion–and I started–from that point forward–to take an interest in it. Before long I began filling up black-and-white notebooks with poetry. I haven’t looked back since!

Who are your favorite authors to read? What is your favorite genre to read. Who Inspires you in your writings?
I enjoy reading a wide range of works. Some of my favorite authors are Nathaniel West, Charles Bukowski, John Fante, Stephen King, Jonathan Swift, Emily Dickinson, Richard Wright, John Kennedy Toole, Denis Johnson, Brett Easton Ellis and William Blake. I am always inspired by new and unique writing. What probably inspires me most though is writing that is either beautifully constructed with a kind of detailed craftsmanship or writing that breaks cultural norms or challenges the status quo. I love genre-bending, satire, dark comedy, horror, anything on the fringe–anything that is sort of rabid. One of my favorite books is “Notes From The Underground,” by Dostoevsky, and I think it is because it is just this kind of mad, deranged voice, this subterranean character, that can tell us what we most need to hear.

Tell us a little about your latest book?
My latest book is titled “Feast Of Sapphires.” This is my second poetry collection. It is influenced, I guess, by beat and imagistic poetry as well as my own spiritual exploration. Probably Arthur Rimbaud is an influence–to take one example. I try to write poetry that comes from a deep place within; that I am connected on many levels. This isn’t always a success. Sometimes, frankly, the poems turn out like crap. But I at least aim for the heights. One thing I believe readers might like about my poetry is the way it covers a range of styles and subject matters. Some of the poems are more comedic, others are morose and reflective. I try to really play on expectations. The eclectic nature of the book will hopefully make it appealing to a wide-range of audiences.