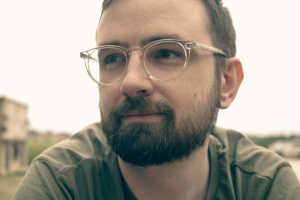 Tell us a little about yourself. Where were you raised? Where do you live now?
Hi, I’m Mark Holloway, a 27-year-old debut fantasy indie author, based in England, UK.

Like most indie authors, I have a day job, where for me personally I work as a scientist. Creative writing, especially fantasy writing, is an outlet for me to break free of the highly technical work I do during my day job, letting me express myself in a way that is almost entirely alien to my professional career.

I live with my wife, and rescue hamster – a half-blind Syrian hamster called Apricot – whose lack of depth perception makes her a terror to handle, but doesn’t stop her from being outrageously cute.

At what age did you realize your fascination with books? When did you start writing?
I’ve been reading fantasy since I was about seven or eight. As I child, I suffered quite a lot from insomnia so reading late at night was one of my getaways from the sheer boredom of lying awake for hours on end, waiting for sleep to take me.

I’ve always loved creative writing, but it was something I always shied away from or even felt self-conscious about as a child. It wasn’t truly until the past year that I really started giving myself the time to write properly, and I fell in love with writing once again.

Who are your favorite authors to read? What is your favorite genre to read. Who Inspires you in your writings?
I’ve always loved fantasy, and there are some fantasy authors that as a fan, you cannot escape from their gravitational pull. One of my all time favourite fantasy authors is of course Robin Hobb, who taught me stories didn’t need to have a happy ending, nor did they need to go the way you want them to. Her stories have always lasted with me far beyond what other authors have written.

Outside of fantasy, I also love some of the classics, particularly Dickens and Shakespeare (yes, I can feel the eye rolls from here, but honestly, Othello is one of my all-time favourite pieces of literature). Jane Austen’s Pride and Prejudice is probably my favourite novel, which makes sense, because I’m also a huge Terry Pratchett fan, and the two are sides of the same coin.

Tell us a little about your latest book?
A healer forced to become a killer for an empire that would grind his country to dust.

Years ago, Aspectors protected the land, performing esoteric miracles both wondrous and terrifying. They used their magic connection to the realm of the Aspect to serve the people of their country, healing the sick, and guarding their borders.

Then the Vin Irudur Empire attacked.

Now as soon as Aspectors are discovered, they are ripped from their families and forced into academies run by the empire to be trained as the Vin Irudur see fit.

To Kehlem, Aspectors are a distant legend, of little importance to the town of Barrowheld where he works with his father as a physician. But when an enforcer of the empire is sent to town in search of an Aspector gone rogue, Kehlem finds himself at the very centre of the empire’s attention.

Kehlem must prove himself useful to the empire, but to do so would turn himself into a weapon so sharp, it would cut any that tried to hold him.

The Soul’s Aspect is a coming of age story, in a similar tradition to those presented by Hobb, Rothfuss and Kuang, but with a particular focus on making sure characters face real repercussions for the pigheaded actions that can often occur in these types of books. All in all, The Soul’s Aspect took around 6 months to write, and then a further 6 months to edit and refine.