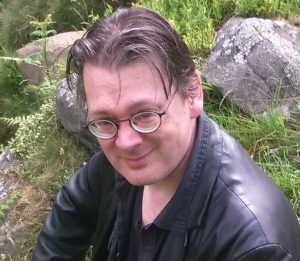 Tell us a little about yourself. Where were you raised? Where do you live now?
Until recently, I was working as a journalist in Manchester, UK, but I stepped down at the end of March to focus more on caring for my father.

He’s 93, has dementia and COPD (among other things), so it was getting a bit much coping with his care needs on top of commuting to what was a pretty intensive day job.

I was working my notice when the whole coronavirus lockdown thing swept over us. Talk about impeccable timing. Still, there’s time to write.

Originally, I’m from Yorkshire. I was born and grew up in Bradford, but these days I live in Stoke-on-Trent in Staffordshire. Quite how I ended up here is a long story, but I’m still very much a Tyke.

No pets these days, although I grew up with an extended family of cats, dogs, guinea pigs, rabbits and goldfish. Oh, there were some stick insects along the way too. All that said, I do have to muck out and feed the Dad — not sure that counts, though.

At what age did you realize your fascination with books? When did you start writing?
Hard to say. The answer is largely lost in the mists of time. I’ve been an avid reader as long as I can remember. The same goes for my regard to books as a physical object: the smell, the texture, the weight and feel of the book, the look of the typography, the sheer sense of presence. A physical book is a sensual thing.

Digital books are fine for the everyday practicality of reading, but they lack the vitality of paper, I feel.

My first forays into creative writing began in around 1985, when I started writing text adventure games for the ZX Spectrum computer. About four years later I started writing my first articles, mostly programming tips for games writers, which helped trigger my interest in journalism as a career.

Then, in 1990, I realised a long-held but little-entertained aspiration to write fiction, when I wrote my first short story. I borrowed a leftover idea from a never-started adventure game. It wasn’t great, but it got me started.

I’d been inspired to take the plunge after meeting an author and talking to him about his work. I guess I caught the bug off him.

Since then, I’ve ploughed on with the journalism, written a lot of short fiction, and four novels overall. Two of these are published with Inspired Quill, Silas Morlock (2013) and Citizen Zero (2017). Both are broadly dystopian tales, but the first is something of a dark urban fantasy, while the second leans more towards science fiction thriller.

By and large, I’m regarded as a science fiction and horror writer. These are labels I’m happy to work under, as they reflect my reading tastes. The thing is, I tend to write to my ideas and worry about genre later.

Who are your favorite authors to read? What is your favorite genre to read. Who Inspires you in your writings?
Tricky question to answer. Authors tend to factor little when it comes to the books that hook my interest (I probably shouldn’t say that, being an author myself). There are a lot of books I’ve read and enjoyed over the years, but I couldn’t tell you who wrote them.

You can probably guess from that list my favourite genre is science fiction, although I don’t tend to think in terms of ‘favourite’; more what I am naturally drawn to, if that makes sense. Fantasy and horror tend to jostle with each other for second place.

I think all the writers I’ve named above have inspired me in one way or another. The list, of course, is far from exhaustive, but they’ve all fed or nurtured that desire to chase the literary dream.

Tell us a little about your latest book?
My latest book is Citizen Zero, a science fiction thriller in the dystopian mould. It wants to make the reader think, as much as it immerses them in a damn good story, by offering a speculative excursion into a future we’re making today.

The story is set in a near-future Britain, where AI has devastated jobs, civil liberties have been surrendered for the illusion of security, and a bitter divide between rich and poor is policed by a system of high-tech surveillance. Social security has been turned on its head, with what’s left of the Welfare State re-tasked to contain and control an urban underclass — the zeros — along with those nominal citizens still clinging to precarious employment.

On the surface, it’s a prosperous consumer society, but behind the facade a political conspiracy is brewing to topple the Prime Minister’s authoritarian regime. One of his own is plotting against him. This is a surveillance society blind where it matters most.

That’s where our protagonist David comes in. He’s unemployed and on his last legs when he’s recruited to take part in the revolutionary JobNet scheme. This places him in a virtual reality world designed, he’s told, to give him every chance to turn his life around. It seems too good to be true, but against all expectations he finds his prospects looking up.

Unfortunately he’s carrying something that will make a mockery of his dreams, and shatter the society that made him. A hapless pawn in the conspiracy, he is unaware until it is too late that he is the carrier of a deadly virus designed to destroy AI systems.

When the virus strikes, David finds himself trapped inside a broken reality, struggling to survive. In the real world, meanwhile, as the virus unravels the machinery of his surveillance state, the PM fights to maintain his grip on power. The country descends into chaos.

But in the ruins of JobNet, a secret lurks. It’s going to turn a pawn into a player, if he can survive. Poor David holds the fates of two worlds in his head.

If this sounds convoluted, trust me, it makes sense; I just don’t want to give too much away. For want of a quick comparison, I tend to describe it as the The Matrix meets V for Vendetta with a bit of I, Daniel Blake thrown in. For those that don’t know the last one, it’s a Ken Loach movie — look it up and you’ll get the idea.

The novel took me around six years to write. Despite being published after Silas Morlock, it was actually written before. I started it in 1994, and then on and off worked it to completion in May 2001. It’s always struck me as amusing and ironic that it predates Google, Facebook, smartphones and so many other icons of our age.

Of course, when Inspired Quill picked up the novel for publication, we worked to bring the everyday tech up to date to account for these things. It’s made the novel all the stronger, but its primary themes remain timeless.