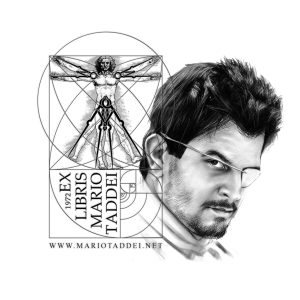 Tell us a little about yourself. Where were you raised? Where do you live now?
I am lucky enough to be born in Italy, I live and work in Milan and I have always had two cats with me who have always kept me company even at night while I studied and built models.

At what age did you realize your fascination with books? When did you start writing?
I have been studying Leonardo da Vinci since 1999, many years. And yet, every time I pick up one of his five thousand codes, I always find something new to study and discover. I have written numerous books on Leonardo, with famous publishers who then distributed my books all over the world. The most famous book is about Leonardo’s machines that I made in 2004, I find this book in all bookstores in the world and it makes me very angry. It will seem strange, because usually scholars never deny what they write, but what I wrote in that book I find now obsolete and outdated, the research I did and Leonardo’s machines that I rebuilt in 3D like the automobile, The bridges, the bombards, the flying machine, the helicopter, the boat with poles, the armed wagon etc .. I find them, copied in all the museums of the world. I recognize my studies and my machines because I have always added something and modified Leonardo’s drawings and at times I have discovered things that no scholar had done before. However, all these machines are not exactly Leonardo’s, in fact I later discovered that all these subjects are actually already existing machines that Leonardo copied, studied and tried to improve. I then moved on to study Leonardo da Vinci directly from his writings, thanks to the teachings of Carlo Pedretti, and here I found the great surprise. Leonardo’s real machines and real projects are hidden in thousands of virtually unknown pages. In fact, they are sketchy, unfinished and difficult to interpret drawings. For this reason they have been “abandoned”. In the last hundred years it has been more convenient for museums and for many curators to copy Leonardo’s usual machines without ever delving into the historical truth. My task, my mission and my passion is to rediscover these projects, study them, understand them and also create models from life, as well as on the computer. In recent years I have therefore studied and discovered new Leonardo machines, exhibited all over the world and my work is only at the beginning.

Who are your favorite authors to read? What is your favorite genre to read. Who Inspires you in your writings?
As a child I read science and science fiction books. When I started painting then I became passionate about art. I bought art books and therefore also by Leonardo da Vinci. I then realized that reading Leonardo’s books referred to thousands of manuscripts, but I could neither buy nor find them in the library. I then discovered that there were luxurious and very expensive editions of Leonardo’s codices. It was a real injustice for a boy not to be able to access Leonardo’s manuscripts just because the publishers had decided to speculate on such important works. I decided that something had to be done, so year after year I designed and built the virtual Atlantic code of 2004. I proposed to Microsoft and jointly to publish it, but it was not easy to reach the right people. In the end, in collaboration with the Ambrosiana and the magazine Focus, I managed to publish my most impressive work: The virtual Atlantic code, giving everyone the opportunity to virtually leaf through Leonardo’s codes!
Now I read more and more ancient books on art and science. I have found that all books in the end always tell about things already said and things already written. Going back to the sources it is possible to discover a lot and it is also surprising to discover the errors of scholars who have limited themselves to copying other texts before them!

Tell us a little about your latest book?
My last book “How to become Leonardo da Vinci
The true secrets unveiled: More than 100 tricks and secrets about Leonardo that will inspire you to become the new Da Vinci!”

Is a journey into Leonardo’s mind to easily understand his secrets and techniques. You will learn the basic principles of becoming a new Da Vinci through a simple and understandable book. How do you learn to think like Leonardo?

We will discover the 100 principles of genius, to become like him, told through his works and drawings full of projects and mysteries, with a simple and direct language for children aged 6 to 99!
Becoming Leonardo is possible and the same Renaissance artistic rules of art, creativity and genius can now also be used with digital tools. Did Leonardo copy? What did you study? What creative techniques did he use? How are these techniques applied today, in the era of the metaverse?
We will learn the Renaissance tricks to create masterpieces, even with digital tools, and we will discover what was the source of Leonardo’s creativity to make the genius within us grow!

“I’ve been studying Leonardo da Vinci for over 30 years. I have made exhibitions all over the world, built hundreds of machines and created multimedia software, books and research to introduce the greatest genius and artist of all time to the general public.
In the lessons and in contact with the public, however, I have always happened to meet people convinced that there is only one of Leonardo, and many others, disheartened, wondered how it was possible that such a “great” and unattainable person existed . Not to mention the people with whom I have often quarreled, convinced that Leonardo can only be born and it is not possible to become like him. How much more wrong and dangerous! Wrong because Leonardo’s history and true knowledge will surprise us, only ignorance creates unreachable myths, dangerous because with an attitude of this type we kill in the birth, in our children and in our students, the desire to become the new Leonardo! I have finally published this book which has a revolutionary and powerful message: everyone can become Leonardo, certainly not easy, but it is possible.
In more than a hundred small chapters, written in a simple and understandable way, I searched and found the basic principles that led Leonardo to be what we know.
It will be surprising to find, for example, that there are ugly drawings, that Leonardo had copied some things, made mistakes and his other machines do not work. In short, there are explanations, techniques, principles and real secrets that can help us along the path of knowledge and art.

Becoming Leonardo is possible and what we have to do is not to clip the wings of our children, potential geniuses, who only need encouragement, guidance and help.In this book I try to give my contribution up to the point of art and technology digital contemporary usable as a tool for modern Da VInci.
If only one of the children (aged 6 to 99) who will read this book understands how to become Leonardo, and will not be afraid to try, I will have contributed to a better future for all of us. “
Mario Taddei