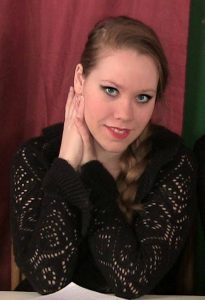 Tell us a little about yourself. Where were you raised? Where do you live now?
My name is Maggie Lynn Heron-Heidel and I am a science fiction, fantasy author. I was raised in the northeast United States and have continued to live there, braving the cold winters even though every spring I say to myself never again! Well, I guess I still haven’t followed through with my threatening since I still haven’t moved after all this time. My husky can’t complain, though. He and my ‘whatsit’ (mutt mix) like playing in the snow!

At what age did you realize your fascination with books? When did you start writing?
I was around seven or eight when I first discovered the magic of reading through Harry Potter. It opened up a whole new world for me, letting me see the magic a book can bring to life. And as for writing, I began at a very young age. I was a dancer and a theatre student, so my parent encouraged me to broaden my horizons by writing a play when I was thirteen years old. Well, over the years that play became a move since I am a filmmaker, and then a full novel when I decided I wanted to become a novelist. Someday soon that story will be on a bookshelf near you and I owe it all to them for pushing me to keep writing.

Who are your favorite authors to read? What is your favorite genre to read. Who Inspires you in your writings?
I have a tendency to favor fantasy stories, but I devour most books I come across, no matter what genre. I love action in books, particularly like the Eragon Series by Christopher Paolini and the Bourne Identity Series by Robert Ludlum.

Tell us a little about your latest book?
War Machine is the first book in my Destiny in the Shadows Series. It follows the steps of an assassin, blackmailed into teaming up with a four-star general to track down an elusive terrorist group intent upon detonating a nuclear bomb inside their city. Sparks fly and not of the romantic variety, at least not immediately… Racing against the clock through the desert, facing harrowing odds and dire consequences should they fail, they discover that the terrorists aren’t always the ones to fear… and may not be their true enemy.

Set in the ruins of New York, WAR MACHINE is a fast-paced adventure thriller filled with betrayal, suspense, and alliances that quickly turn into deadly enemies. Destiny in the Shadows hauntingly echoes the state of the world today and the fate of the heroes determined to save it.