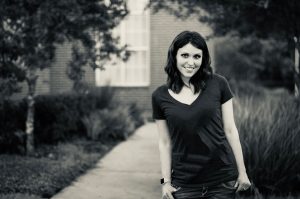 Tell us a little about yourself. Where were you raised? Where do you live now?
I was born and raised in Southern California, in the Inland Empire, to be exact. I spent my days by a pool, at the beach, and Disneyland. Oh, and the ice rink, as I was a competitive figure skater.
I went to college at Brigham Young University, where I received a Bachelor’s in American Studies, and a minor in Communications. I currently live in glorious Florida with my husband and kids. Here, I don’t get to go to Disneyland anymore, but Disneyworld is a nice consolation prize.
I don’t have any pets, as my husband is allergic to basically everything in this world. Growing up, though, I had a few cats until they were eaten by coyotes. Growing up, my house backed up to an orange grove. Eventually all my cats would explore too far…

At what age did you realize your fascination with books? When did you start writing?
I started writing stories as soon as I learned how to hold a pencil. I loved to make up characters and grand adventures. Well, grand to my seven-year-old self. My first series was fiction. I wrote them when I was around seven or eight, and titled them “The Slena Stories.” I don’t remember much about them – just a girl named Slena who would go see exotic lands. Those little one-page novellas were the start of my writing career, though.

Who are your favorite authors to read? What is your favorite genre to read. Who Inspires you in your writings?
So many authors have inspired me! My absolute favorites, though, are Madeleine L’Engle, Gerald N. Lund, Sarah J. Maas, Victoria Hanley, and Gerald Morris. Each one wrote books that have become a part of me and drove me to write better.
My favorite genre is, and probably always will be, fantasy. Madeleine L’Engle introduced me into it when I was eight or nine. From then on, I devoured books with magic and dragons and feats of courage. I hold my love of fantasy largely because of her.

Tell us a little about your latest book?
My latest book is called “Entwined Paths.” It is the second installment in my Swift Shadows series. It’s a YA Fantasy, of course. The series follows Declan and Emry as they try to piece their lives and country back together. This particular book is actually a prequel to the first. I set it up this way, though, so that the twists of the first book wouldn’t be spoiled. It’s a little different, but it works great!