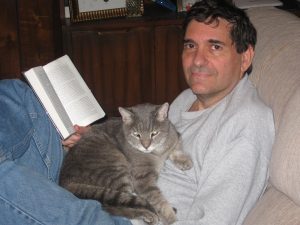 Tell us a little about yourself. Where were you raised? Where do you live now?
I was raised in Savannah, Georgia, actually Skidaway Island, which is nearby, and now I live in Nashville, TN. Yes, I have one pet, a cat. I’m married with three grown children, and I’m an audiologist by day. I help Veterans with their hearing issues. I also play golf on Sundays and try to write as much as possible. I’ve written 4 novels.

At what age did you realize your fascination with books? When did you start writing?
I started writing when I was about 12. My first short story was, “What, No Galoshes?” Kinda strange, for sure. I also wrote a story about a thirteen-year-old boy who refused to have his bar mitzvah. I found that I liked to type as much as write. Just the feel on the fingers on the keys, the fast movement of the letters, it was kinda like playing piano with words. I started writing and then re-writing and I guess I couldn’t stop.

Who are your favorite authors to read? What is your favorite genre to read. Who Inspires you in your writings?
My favorite author is Philip Roth. He just seems to speak to me for some reason. Not sure why. I also like Gore Vidal because he’s so brilliant. I also like John Banville. Catcher in the Rye probably inspired me more than anything. I try to write with a voice and Catcher in the Rye has such a strong voice. It’s something I try to emulate.

Tell us a little about your latest book?
My novel LIKE NO OTHER BOY is about a child with autism who appears to have an uncanny ability to communicate with chimpanzees using natural instinct, body language, and mental picturing. It’s gotten good reviews on Amazon for which I am very grateful. Basically, the father goes the distance for his son who can’t speak and is withdrawn into his shell. But when he gets around chimps, the father sees a kind of magic occurs. His on becomes more open and there’s a genuine smile on his face. But the mother doesn’t want the son to start acting like a “monkey boy.” So she does everything possible to see that the son does not get with the chimps. There is a custody battle and things blow up from there.