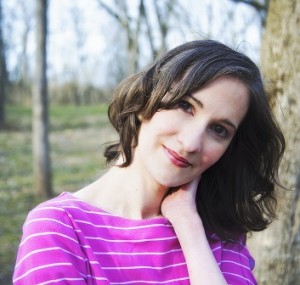 Tell us a little about yourself. Where were you raised? Where do you live now?
I grew up in Grand Blanc, Michigan–a suburb of Flint. It was a town obsessed with golf. I’m not an avid golfer, but let me just say I can handle those little windmills on the mini-golf places like a champ. I married a military man which had me moving to South Dakota, then Portugal, and now to Dayton, Ohio. I’m a freelance journalist and writer so I was able to write wherever we ended up!

At what age did you realize your fascination with books? When did you start writing?
I wrote my first “story” in the first grade. It was a “Name the Teddy Bear” contest open to the whole school (kindergarten through eighth grade) and somehow I won with the “brilliant” opening line of, “We should name him Taffy because he is sweet like candy.” That year Santa brought me one of the Cabbage Patch Kid storybook kits that helped kids make little picture books. I wrote a story and my grandpa helped me line up the book plates. I didn’t know what the word, “illustrated,” meant, but I put down that my grandpa illustrated the book in the inside cover. I loved that toy and a few years later I wrote a story with it and my third grade teacher put it on the bulletin board. I’ll never forget seeing my friend’s parents stop to read it at a “Meet the Teacher” night. I stood off to the side watching Mr. and Mrs. Cameron reading my little book in awe.

Who are your favorite authors to read? What is your favorite genre to read. Who Inspires you in your writings?
My favorite authors are: F. Scott Fitzgerald, Mitch Albom, Edith Wharton, Helen Fielding, Cathy Cassidy, Cathy Hopkins, Francine Pascal, Erika Tamar, and Ellen Goodair. I read women’s fiction, YA, middle grade, biographies and memoirs, and mysteries. I really get inspired by Fitzgerald’s prose and I feel like I can get into the worlds that both Cathy Cassidy and Cathy Hopkins build for their characters.

Tell us a little about your latest book?
Landry Albright gets pushed into trying out for the American Ingénue reality show modeling competition with her two best friends. She doesn’t think she stands a chance, but she advances to the next level in the competition and her friends ignore her when they get cut.

Enter the gorgeous Devon, who also makes the first cut and includes Landry in her clique. Devon becomes the perfect best friend, but can their friendship survive the competition?

Landry hopes her big break could come at any moment, but soon sees there’s much more to modeling than just getting your hair done and looking pretty. She begins missing out on being with new friends like Ashanti, a girl who truly has Landry’s back. Landry also has the chance to have a boyfriend when she meets a boy named Vladi from another school.

Part of Landry wants to be famous (and have her hair look good for once), but part of her just wants to be accepted. She learns about friendships, being true to yourself, and that a good hair conditioner doesn’t hurt.

I came up with the idea for the main character, Landry, when I was in the sixth grade. Later, in college, a professor told me I should write the book I wanted to read so I began the first chapter then and several years later (and a rewrite or two) I was sending it out.