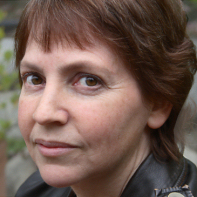 Featured Interview With Karen A. Wyle

Tell us a little about yourself. Where were you raised? Where do you live now?
I was raised in a few different places: in Connecticut, in two different suburbs of Hartford; in Palo Alto, CA; and in Los Angeles. I now live, and have lived for more than thirty years, in semirural Monroe County, Indiana, between two small dots on the map. We had a “Heinz 57” mutt for thirteen years, but lost her around three years ago. We hope to get a golden retriever puppy soon.

I’ve been, roughly in order (though some of these phases overlap), a would-be novelist; a poet; a lawyer; a photographer; a mother; a novelist; and an author of picture books.

At what age did you realize your fascination with books? When did you start writing?
I started reading at around age six, and quickly became a compulsive reader. I began writing “books” (very short handwritten texts, bound in cardboard) at age eight, and poetry then or a little earlier. I attempted a novel at age ten, and again at age fourteen. I returned to writing novels in my mid-fifties (in 2010). By then, Amazon, ebooks, and a more practical form of self-publishing allowed me to realize my childhood ambition.

Who are your favorite authors to read? What is your favorite genre to read. Who Inspires you in your writings?
I will inevitably forget some of my favorite authors, but they currently include Lois McMaster Bujold; Grace Burrowes; Jane Austen; George Eliot; Becky Chambers; Naomi Novik; and M.C.A. Hogarth.

After reading mostly science fiction for many years, I’ve more recently branched out into historical romance, fantasy (though not the epic sort), and historical mysteries. I dabble in other genres, including contemporary romance and biography.

I would guess that every author whose books I finish inspires me in some way. The first to do so was probably Walter Farley — hence my cardboard-covered series about a black stallion (named Collybird). Both George Eliot and contemporary YA author Caroline Cooney impressed me with their unflinching focus on how irrevocable mistakes can be. Mary Doria Russell, during her brief career as a SF author (before turning to her excellent historical fiction), showed me just how much a science fiction author could do with the human condition. Much more recently, M.C.A. Hogarth has shown me how a set of connected series can create and flesh out a fictional universe.

Tell us a little about your latest book?
I’m between two book releases right now, so I’ll briefly describe both.

What Shows the Heart, released July 15, 2021, is the third book in my Cowbird Creek historical romance series, set in 1870s Nebraska. It can be read as a stand-alone, although readers familiar with the series will encounter some old friends. Here’s the teaser:

After Jake, son and grandson of preachers, tried and failed to protect Mamie from small town cruelty, Mamie left their small town to fend for herself. Neither expected to see each other again. Now, many years later, Jake is a bitter man with little beside regrets, and Mamie, after much struggle and hazard, runs the thriving parlor house in Cowbird Creek. Can they make a future together, or will the shadow of Jake’s past overtake them both?

I wrote the rough draft in just under thirty days during National Novel Writing Month (aka NaNoWriMo) — which is how I write all my novel-length rough drafts. I put it away for a month and then revised and edited it for six, benefiting greatly toward the end of that time from the input of several beta readers. I should perhaps, given the presence of a madam, say (to the relief of some and the disappointment of others) that while there are sexual encounters in the book, none are prolonged or explicit.

Coming out next, in just a few days, is my first picture book(!), You Can’t Kiss A Bubble, delightfully illustrated by Siski Kalla. I started writing picture books many years ago, while pregnant with my older daughter, but am only now finding illustrators and bringing them to life. Using simple words, and a mixture of silly imagined scenes and more realistic ones, this book looks at both the charm and the transitory nature of bubbles, and helps its young audience appreciate how we can take joy even in the impermanent. Children can giggle at a little girl bringing a bubble to a friend’s house or taking it for a walk, complete with leash, through the streets of her town. Then they can lose themselves in the lovely settings showing children enjoying bubbles for what they are.