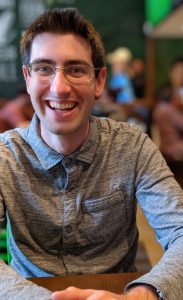 Tell us a little about yourself. Where were you raised? Where do you live now?
I’m proudly Canadian. I grew up around Vancouver, B.C. but moved to Ontario six years ago. I was raised right on the American border and spent most of my summers growing up in the States, mostly around the Seattle area. I used many of my memories from summers there in my debut novel, Pender’s Death.

I’m currently living in Hamilton, which is just over a half-hour from Toronto. I live with my wonderful fiancee, Victoria, and our two dogs, Senator and Tungsten. My dogs are a wonderful help to my writing. Whenever I’m battling writer’s block, a long walk with them is the perfect cure. And when I’m in the zone and pumping out chapter after chapter, they cuddle me and keep me cozy in place.

I remember writing my first series of books when I was only eight. The entire series was loosely based on my dad (I only bothered to change the first letter of his name to have my main character!) and his job. I would write the books in Microsft Word then illustrate them in Paint, since an eight-year-old is of course writing picture books. I probably wrote those books for a year or two and had more than 20 built up.

Who are your favorite authors to read? What is your favorite genre to read. Who Inspires you in your writings?
I’d say John Grisham thrillers have been my favorite for a long time and are the closest inspiration to the thrillers I write. More recently, I’ve been enjoying Friedrich Bachmann’s novels. I try to alternate equally between fiction and non-fiction books and love reading a good legal, political, or financial thriller.

Tell us a little about your latest book?
My newest novel, Pender’s Death, follows Adam Pender in the aftermath of his mother dying. Her death brings the vultures circling as Adam tries to build on his family’s legacy and take over their business. It isn’t an easy task for him and several boardroom battles await.

All the while, Adam’s hunting for answers to the many questions surrounding his mother’s suspicious death. He’ll lean on his friends for help in the search and push them to their limits, but will he push them right out of his life?

The central question of the book: Can Adam keep his life together as everything falls around him, or will he and Pender Industries be added to the list of casualties?

It’s 500 pages of a thrilling mystery unfolding in corporate America.