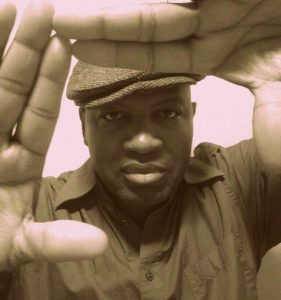 Tell us a little about yourself. Where were you raised? Where do you live now?
Well, I was born and raised on the West Side of Chicago. I grew up in a family of ten, including myself, eight brothers and one sister. As a kid, I always loved drawing, comic books, and movies, especially the classics that starred legends like Humphrey Bogart and Orson Welles. Also, I loved watching films by Alfred Hitchcock, Billy Wilder, Fritz Lang, and many others of their visionary ilk. I currently live in Chicago with my wife Cat Ellington, our three children, and our pet Pomeranian.

Who are your favorite authors to read? What is your favorite genre to read. Who Inspires you in your writings?
As far as books are concerned, my list of favorites is endless, but I’ll be brief. Books by Stephen King, Harlan Ellison, James Baldwin, Ursula Le Guin, Anne Rice, Carl Hiaasen, and Elmore Leonard are only a few of my most loved to read. My favorite literary genres include: mystery and suspense, thrillers, horror, crime capers, and history. As an author, I am most inspired by those works of Stephen King, James Baldwin, and Tom Wolfe.

Tell us a little about your latest book?
The Making of Dual Mania: Filmmaking Chicago Style, a book that I co-authored with theater critic and writer B.J. Patterson and Reviews by Cat Ellington author Cat Ellington, was inspired by the motion picture Dual Mania, a psychological suspense thriller that I wrote, produced, and directed. The story came into being while I was watching the Jeffrey Dahmer trial on cable TV in 1992. This book takes the reader on a personal journey through the process of making an independent feature film on a low budget, and details the creative process of interacting with other creative artists from actors to film production crew members to Hollywood producers to behind the scenes battles with film distributors, etc.