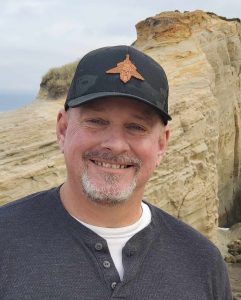 Tell us a little about yourself. Where were you raised? Where do you live now?
I am a midwestern guy, handspanked and corn fed. I am the eldest in my family and the wandering one. I left home at 18 and have lived in the north, south and southwestern US. I now live in the Pacific Northwest with my wife and two dogs.

At what age did you realize your fascination with books? When did you start writing?
I was fascinated with books and reading very early on. I was an active reader by age 4 and one of my earliest memories is being curled up on a couch with my dad while he read Travels With Charlie to me. I wrote my first story in first grade, an adventure about two soldiers who go into a cave to hunt a werewolf. Since then I have written a few books on video game strategies and a few video game scripts but fantasy and science fiction are my first writing loves.

Who are your favorite authors to read? What is your favorite genre to read. Who Inspires you in your writings?
I am a sponge for good post-apocalypse fiction and other realm fantasy, as long as it is not too romance smooshy. My current favorite authors are DJ Molles and Will Wight. I have a soft spot for Stephen King because of the Stand. For hard, factual end-of-the-world writing William R Forstchen is the man in my eyes.

Tell us a little about your latest book?
The Divided Man Book One is the story of what could have happened if the prayer of the Ghost Dance had been answered by the universe. The Ghost Dance was a religious movement that swept the Native American tribes of the west and southwest in the late 1800’s. Its believers thought that by dancing the sacred dance, the land would roll up and reveal the world as it had been before white men came and took away their way of life. There were variations depending the shaman who had the vision. Some included good white people, some excluded everyone but Native Americans.

In the Divided Man Book One the world has ended in global war. Most of the human population is gone and the veil between the spirit world and our has been opened. Every god known to man has returned. Some good and some evil.

Out of the ruins, two are called. One to save the Tree of Life. One to drag it to darkness. Stripped of his soul by the elk-headed god Manitou, Luke Kimball is on a spirit quest that binds his fate to the Tree and the dark intent of the Wendigo. In a land where the roles of god and man have no clear boundaries, time is fluid, and the tragedies of his past await his return, Luke will have to kill a god to succeed. Or become one.