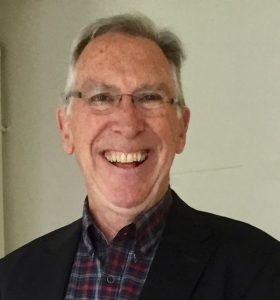 Tell us a little about yourself. Where were you raised? Where do you live now?
John Holliday grew up in England, where he served in the Royal Air Force and later with IBM. After moving to Canada and initially continuing to work with IBM, John started the first of many businesses, mostly in the IT industry.

A subsequent business opportunity resulted in a move to Australia where he continued his entrepreneurial activities. John’s interest in writing arose when he decided to write a memoir of his business life, ‘Toughing It Out: Adventures of a Global Entrepreneur’. A visit to a still-functioning orphanage in Jakarta, founded more than 180 years before by his ancestor, Walter Medhurst, kindled his interest in recording Walter’s life. So became ‘Mission to China: How an Englishman Brought the West to the Orient’, published first in England followed by a Chinese version published in Taiwan.
During the research into Walter Medhurst’s life, John uncovered the extraordinary life of Clara Colby, whose grandmother was Walter Medhurst’s sister. Clara Colby, he determined, must be the subject of my next book. ‘Clara Colby: The International Suffragist’ has been published in time for the 100th anniversary of American women winning the vote, to which Clara’s efforts contributed significantly.

John lives with his wife, Colleen, on the Gold Coast in Queensland, Australia.

At what age did you realize your fascination with books? When did you start writing?
Covered by the previous question.

Who are your favorite authors to read? What is your favorite genre to read. Who Inspires you in your writings?
I am fascinated by history and historical novels. Among my favourite writers are Robert Harris, Frederick Forsyth, Edward Rutherfurd, and Ken Follett.

Tell us a little about your latest book?
Clara Colby: The International Suffragist.
This book is the story about a leader in the cause, which one hundred years ago, gave American women the right to vote. Clara Colby was born in England, graduated as valedictorian of the first woman’s class at the University of Wisconsin and became a writer, publisher, teacher, public speaker and friend of many leading figures of her day. Susan B. Anthony and Elizabeth Cady Stanton, the founders of the suffrage movement in America, became Clara Colby’s mentors. Her journey is an epic saga of untiring and heroic endeavor, sometimes under the most adverse circumstances, across the United States, and her native England. She suffered great injustice, but she never complained, and her accomplishments contributed significantly to the successful introduction of the Nineteenth Amendment.

Clara’s story stands out among all of those who so selflessly contributed to the suffrage movement. With the centenary of the Nineteenth Amendment and the US election in the same year, this book is extremely relevant to anyone who has an interest in politics, US history, women’s history or appreciates learning about a woman who would stop at nothing to do right by the people she represented.

The book took me two years to complete and uncovered some previously unknown details. It was a very personal journey because Clara Bewick Colby was my grandfather’s cousin.