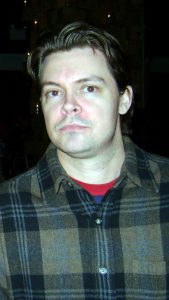 Tell us a little about yourself. Where were you raised? Where do you live now?
I started writing stories back in kindergarten. Most were about ferocious beasts, knights, and brave explorers. I guess those tropes have stayed with me. I still enjoy writing fantasy/adventure, but now I’ve added a bit of humor into the mix.
I grew up in Forest Hills, and now I live with my family in Astoria NY. We also had pets. I had a cat when I was a kid. Now we have a cat and a dog.

At what age did you realize your fascination with books? When did you start writing?
Even as far back as Kindergarten, I knew I wanted to be a writer. My artwork was pretty crummy, but I wrote pretty good stories.

Who are your favorite authors to read? What is your favorite genre to read. Who Inspires you in your writings?
Kurt Vonnegut, Terry Pratchett, T.C. Boyle, Terry Brooks

Tell us a little about your latest book?
Quest For the Box is my latest book. It is the second book in my Nebilon Series. A giant blue egg hatches and out pops this baby dragon which causes a heap of problems for Archmage Harberk. He calls upon Luma to tame the beast. She has helped him about before, but this dragon is a handful. She starts to bond with it, and then she starts to have her visions. She is a Seer, and when she has her visions, she is usually pulled into action. Eventually, she finds this mystical box, but when she falls under its spell. Nobody in her party can rescue, so Luma has to dig deep to break the spell. I don’t want to give out any spoilers, so you have to see what happens to her and the fate of Nebilon.