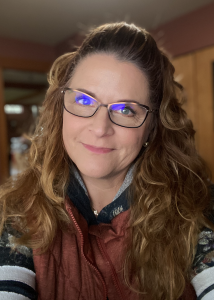 Tell us a little about yourself. Where were you raised? Where do you live now?
Hello, I was born in Washington state and with the exception of a year have lived here my whole life. We live in the country about an hour outside of Seattle, but also have a boat up near the Canadian border and spend a lot of time on it as well. We did have a black lab, Molly, but we lost her at age fifteen and never had another one. My son and his girlfriend have a red heeler, lab, and boxer mix named Lefty and she is our pride and joy. We spend a lot of time spoiling her then return her back to her parents.

At what age did you realize your fascination with books? When did you start writing?
Oh, wow, I’ve always loved to read, and am acutely aware of loving it from an early age. I remember the first “books on records,” mostly fun readers and Disney. As I grew, I became even more of an avid reader. I started becoming interested in writing in 2008 when caring for an ailing family member. I wrote a book to see if I could, then shelved it. In 2015 I self-published it. I fell in love with creating a tale and my second book was picked up by a New York publisher. The rest is history!

Who are your favorite authors to read? What is your favorite genre to read. Who Inspires you in your writings?
Around the year 2000, a friend of mine gave me the first Outlander book and I was hooked. I have read every one since then! I love Diana’s ability to weave and layer a scene. So, often epic sweeping novels are heavy on the scenery and it can go on for pages. I love how she explains what’s going on and keeps you interested, then the fully fleshed out and real characters are without parallel. So, she inspires me, but I loved the old Judy Blume books with real problems. I love the Sophie Kinsella’s and Darynda Jones’s who can tell a serious story with humor. I’m in awe of the grace of Peggy Jaeger, JR Ward, Nora Roberts, Brenda Novak, and Beverly Jenkins in their ability to crank out book after book, staying fresh and relevant. So, many inspirations, so little time to tell them all.

Tell us a little about your latest book?
So, I’ve had three books out this year. The first is a short story from the Australia Burns: Vol. 2 anthologies, entitled, “Dancing Through Tears,” about my family’s experience during the Route 91 massacre in Las Vegas. Book two, entitled, the Warrior’s Progeny, is the second book of my award-winning series, Heaven & Earth. My latest book is entitled, Releasing the Catch, is about a woman Alaskan fisherman, a story of fathers and daughters, letting go of the past, self-discovery, and overcoming odds made harder simply for your gender. It’s told in two parts, about two individuals at different times in an extraordinary life, with so much to teach one another.