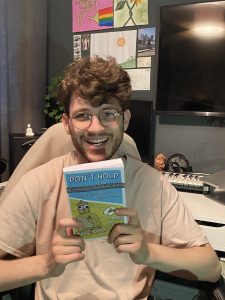 Tell us a little about yourself. Where were you raised? Where do you live now?
As well as being a writer I’m also a music producer who goes by the name, Low-Res Royalty. I make Lofi Hip-Hop and funk music, and I’ve been relatively successful. Though, some of that success with my recent releases could probably be attributed to my studies at the British & Irish Institute of Modern Music in Bristol. However, I’ve taken a break from music production this year to focus on my passion for writing, and to answer the question, what is Breatharianism? I’ve always had a strong interest in the esoteric and in outlandish ideas, and the airheaded world of Breatharianism is perhaps the strangest practice I’ve ever come across. When I came across the practice, I knew instantly that I had to explore it further, and thus my journey began. After a hiatus from the literary world, my love for writing and investigation was ignited.

At what age did you realize your fascination with books? When did you start writing?
I’ve written for as long as I can remember. When I was a small child, around the age of seven I think, I would write my own comics. There was one comic in particular that I always remember quite vividly: Mr. A. It was about a business man who could plug a USB into his belly button and download whatever superpowers were available online. I eventually took the character, Ed Stone was his name, and adapted it into a novella when I was a teenager. I never properly published it, however. And it took a much darker turn. It was called, The Adventures of Mr. A: The ‘A’ Is For Alcoholism. This time, instead of downloading superpowers, Ed would take LSD and see himself as a superhero. I’ve never really stopped writing since. Sure, I took some time out to focus on my career as a music producer, but the want to write was always there. It was until I started to properly read and discover my love for books, that I developed a real understanding of what it takes to write a book. Embarrassingly, it wasn’t until the UK COVID-19 Lockdown of 2020 that I really got into reading. Once I found Jon Ronson, that was it. I now read a book a week – I spend so much money on books that I had to buy myself a Kindle so as not to keep rinsing my bank account.

Who are your favorite authors to read? What is your favorite genre to read. Who Inspires you in your writings?
I read a lot of Jon Ronson and investigative journalism books. The Men Who Stare At Goats and THEM: Adventures With Extremists by Jon have been great inspirations to me, and I don’t think the idea for Don’t Hold Your Breath would have spawned had it not been for those books. Recently, however, I’ve found myself reading a lot of travelogues and memoirs like Tuk Tuk for Two by Adam Fletcher, and Girlvert by Oriana Small. I’m a big fan of Richard Ayoade too.

Tell us a little about your latest book?
Don’t Hold Your Breath: The Airheaded World of Breatharianism documents my journey and exploration of the practice. I meet several Breatharians, all with differing and wild beliefs and views about the practice. Some believe in telepathy, time travel and the existence of three Earths. Perhaps the most unbelievable claim I came across during my time with Breatharianism, is that McDonald’s Double Quarter Pounder with Cheese Meals can help to transport you through inter-dimensional space. And so, after talking extensively with the Breatharians, I attempt to answer the question, can McDonald’s send you to space? There was really no other way for me to answer this question than to try and ascend through space, to another dimension, by following a McDonald’s meditation method I was taught. The answer to the may seem like an obvious no, but there’s a lot more to it. Some strange things happened to me throughout my time with the Breatharians.