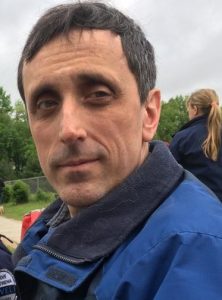 Tell us a little about yourself. Where were you raised? Where do you live now?
I was raised in a small town in northern Michigan, where I learned to dream of the stars, airplanes, and dragons. I eventually earned a degree as an aeronautical engineer – but I never lost my enthusiasm for fantasy novels, even if the responsibilities of life had interceded.

At what age did you realize your fascination with books? When did you start writing?
I was always surrounded by books, from my earliest days of elementary school – whether fiction or non-fiction.

I wrote my first attempt at a fantasy novel when I was still in high school. An abysmal failure to be sure. But it was out of that failure that I came to appreciate the persistence and tools that I would need if I ever expected to write something worth publishing. I never completely gave up writing, eventually publishing a non-fiction book – through a traditional publishing house – dealing with aviation history. It was my discussions on literature with may daughters, however, that convinced me to try my hand once again at writing a series of fantasy novels.

Who are your favorite authors to read? What is your favorite genre to read. Who Inspires you in your writings?
I have so many authors that influenced me, even from a young age. I adored Shakespeare. Love Tolkien. And spend long hours reading Anne McCaffrey.

Although I like to read widely, fantasy still holds a special place for me, and my daughters have been the inspiration behind my renewed interest in becoming a fantasy writer.

Tell us a little about your latest book?
Storm’s Herald is the first in a series of books, following the story of Lynette, a peasant girl who dreams of becoming a sorceress – but who finds that journey more complicated than she had ever imagined.

And it is also the story of Baxter, a farm boy turned squire, who’s greatest asset is his tenacity and determination to work for success.

I intentionally did not want the main characters behind this series to fall into a traditional, “chosen one” category. I much preferred to write the story of someone who tried, failed, and tried again to achieve their dreams. To tell an epic story from the standpoint of a participant in the grand tapestry of events – but a participant who was not the primal source of all power or knowledge. Success would have to be earned, not automatically granted.