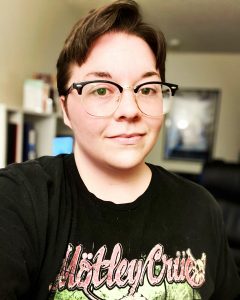 Tell us a little about yourself. Where were you raised? Where do you live now?
I’m Grayson Sydney, LGBTQ thriller, science fiction, and romance author. I’m based in the Pacific Northwest of the US and spend my time writing when I’m not busy with college.

While I write in most every genre, thrillers and science fiction with a healthy dose of romance throughout hold my heart. As a transmasc writer I want to write diverse stories and characters that aren’t usually seen in mainstream media. I’ve been writing seriously since I was in middle school. It took me until mid-2020 (as well as mid-pandemic) to finally start self-publishing and I haven’t stopped researching this corner of the industry since. While it would be cool to have something traditionally published one day, I feel self-publishing is the future of inclusive stories. After over a decade working in freelance illustration, it’s been a breath of fresh air changing gears in this way. Apart from this, I also work as a blurb editor for Relay Publishing.

I have two cats, both tabby/maine coon mixes that are completely lazy and ridiculous creatures. When I’m not writing I’m either bugging them, studying, or playing video games.

At what age did you realize your fascination with books? When did you start writing?
I’ve been reading and writing since I was very small. I was the kid salivating over Scholastic book fairs when they came to my elementary school. In middle school, there was a create your own book assignment, and though it turned out awful, it was the first time I’d ever made something physical like that. It inevitably set me on a path to several entrepreneurial endeavors in high school, where I seriously got into freelance illustration.

As a teenager and young adult, writing became a habit as well as a hobby. I think it was 2018-2019 when I realized I had written around 250K in six months. That was when gears started turning of taking my writing to the next step.

Who are your favorite authors to read? What is your favorite genre to read. Who Inspires you in your writings?
I will read anything by Giles Kristian, Cormac McCarthy, and Alden Bell. In terms of genre, I’m open to almost anything. But post-apocalyptic, LGBT, science fiction, historical fiction, and paranormal are the genres I automatically gravitate to.

My inspirations as a developing writer were Suzanne Collins, of Hunger Games, and Libba Bray and her Gemma Doyle trilogy. Those series heavily influenced me growing up, and really had me hooked on writing engaging worlds.

Tell us a little about your latest book?
My newest book, Feel Good Kings, is an LGBT science fiction novel set in 1986, to be released August 30, 2021. This one took me thirteen months to write, and it actually broke my personal record for single longest story in terms of word count.

Feel Good Kings follows seventeen-year-old Danny Kettler. He’s just moved from Oregon to the fictional town of Bitter, Illinois. He’s a teen with a lot of internalized self-hatred because he’s gay in a household that does not tolerate it. To make things more complicated, he’s Jewish but questioning. This creates a lot of internal conflict for him through the course of the story.

The positives in his life are his friends, West and Olive. West is Danny’s love interest, and Olive is, in all respects, his partner in crime. When Danny begins working for a secretive trial in the city, he develops telekinetic abilities that threaten to tear his life apart.

The book has been a blast to write. Now I just need to finish the sequel.