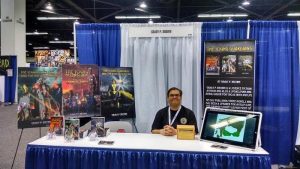 Tell us a little about yourself. Where were you raised? Where do you live now?
I am a science fiction, fantasy, and superhero author with high-functioning autism. I was raised in Southern California and I have lived there ever since. I have two pit bulls named Wally and Fitch and they are the light of my life. I also have a miniature poodle named Piper and she is the alpha of the pack. My two pit bulls are being dominated by a small, elderly poodle! I also have a desert tortoise named Speed, who I have had since I was five-years-old. He is definitely the oldest of my pets and he thinks he’s a dog.

At what age did you realize your fascination with books? When did you start writing?
I have always had a story in my head for as long as I can remember. When I was little, I started telling these stories through pictures I would draw on tablets my parents would give me. When I was in sixth grade, I not only started telling my stories through words, but I also developed the ambition to publish my stories. After I spent the past three years studying medieval history, my stories became more complex, especially my fantasy books.

Who are your favorite authors to read? What is your favorite genre to read. Who Inspires you in your writings?
My favorite author would be Christopher Paolini, author of the Inheritance Cycle. Not only do I enjoy his work, but he also inspired and influenced the way I write today. Christopher Paolini was the one who inspired me to be an author myself. My favorite genres to read would be science fiction, superhero, and fantasy.

Tell us a little about your latest book?
My latest book “The War of the Gilded Beasts”, is about a feud between House Magnus and House Sylva. The main characters from House Magnus are Kemrin, Caelum, Daegar, Vaeron, and Ymir. Kemrin, Caelum, Daegar, and Vaeron are quadruplet brothers while Ymir is their little sister. All five are budding sorcerers and dragon riders. The Magnuses also possess the Imperial Sword of Power known as Gramfyre, which can only be wielded by the descendants of its creator. The main characters from House Sylva are Emperor Autem, his triplet sons, his witch wife, and his infant granddaughter. To counter the Magnuses and their dragons, the Sylvas engage in blood magic and dark alchemy, resulting in the creation of mindless, unholy monsters. The ultimate prize of their feud is the Imperial Throne. Whoever holds the Imperial Throne has absolute power over an empire that consists of nine ancient kingdoms.