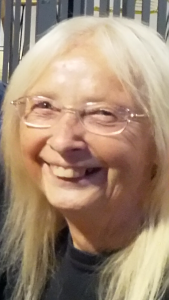 Tell us a little about yourself. Where were you raised? Where do you live now?
Gisela (Gigi) Sedlmayer was born on 19 May 1944 in Potsdam, a suburb of Berlin in Germany.
Her family escaped to the West just before the infamous wall went up. They moved around in Germany, following where her dad got work. That meant she had to change 9 times schools. In the end she never had friends again, of fear, she will lose them again.
Finally, they settled in Munich where Gigi studied architectural drafting and met Albert in 1965, marrying in December 1967. She worked as a civil drafts-person in various private consultancies in Munich.
Since her uncle was a writer, she tried to write short animal stories herself. Nothing further came of it, but she developed a love for the written word and started to consume books.
In May 1975, Gigi and her husband moved to New Zealand. Because of language challenges, she started a handcraft business. As a specialty, she made colourful parrots in several sizes of which she sold thousands in a few years.
In 1988, they decided to adopt and became adoptive parents of twin girls the year after. They lived in New Zealand for eighteen years and moved to Australia in September 1992.
One year later Gigi was diagnosed with cancer. After operations and radiation, she withdrew, thinking that she would probably soon be dead, like her friend who died of cancer, but her two little girls gave her the courage to keep going. After a few years, still among the living, her brain started to work again, so she thought, ‘Get a grip on yourself and do something good with your life’.
She remembered the time she wrote short stories and got inspired again, seeing her husband Albert writing the story of their adoption. Her English became increasingly better, so she pressed on to develop her creative writing.
Albert taught her how to use a computer and she wrote many short stories.
She now loves writing and spends most of her time at the computer, developing new story lines. She also loves traveling, 4×4 touring, swimming, gardening, handcrafting, reading, fossicking and enjoys good adventure DVD’s or going to the movies.
Teaching Children Self-Confidence Through Service to Others

At what age did you realize your fascination with books? When did you start writing?
As long as I can remember, I had my nose in books all the time. I loved reading, from my early childhood. When I found out, that my uncle was a journalist and writer, I tried to write short animal stories, since I loved animals, particular horses in that time.
When I was diagnosed with cancer, the only thing I could do after, for not only watching TV and caring for my family, I started to write short stories again. I even was so bold, to enter them into competitions. I was inspired of the good comments and went on writing. And one of the short stories was about handicapped Matica and her condor Talon. So started the series.

Who are your favorite authors to read? What is your favorite genre to read. Who Inspires you in your writings?
Since I lived in Germany I read German books, and the most I loved was “Karl May”. A book series with many books, adventure. Then coming to New Zealand I started to read ski-fi. All books by “Frank Herbert”, the Dune series. I think I read them 3 times by now. Also many books by Anne McCaffrey. And books by sky-fi author Ben Bova. I also was inspired by Cressida Cowell, as she was the author and creator of the films: “How to train your Dragon”. I absolutely loved her books and the movies they did. And many more.

Tell us a little about your latest book?
My latest book in the Talon series, book 6 is: TALON, WINDSONG. It just got an Award by “BOOK EXCELLENCE AWARD, 2021. All 6 books together got 13 Awards now.

When I started book 6 to write, I actually didn’t know, where it would lead me, because I had to invent more and more adventures, what Matica and Talon could have. Here is a short description of it.

The poachers are gone, and the birds are safe. Now Matica is becoming anxious thinking of the upcoming holiday to Australia – she does not want to go or leave her birds. But Talon, understanding her misery, helps to ease her mind.

With distractions all sides, Matica soon finds herself involved in current happenings – the letting go of Elcano’s ashes from the top of the Andes, and near tragedy of Crayn falling while climbing up the mountain. The condors play a vital role in saving the day.

Talon shows Matica the puma and her cubs. But things go wrong when the female puma smells them and attacks. Will they escape the big cat?

As a birthday surprise for Matica, Aikon asked the birds to fly with her for the whole day. The birds agree and the thrilling adventures she has now with near misses, the finding of old bones, snakes and spiders, Talon Windsong adventures will keep you turning the pages and on the edge of your seat.