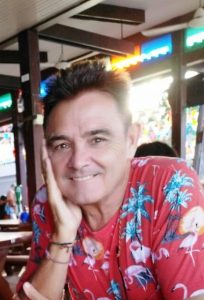 Tell us a little about yourself. Where were you raised? Where do you live now?
I am originally from Bedford in England but I grew up in Middlesbrough. When I was four years old, in the mid-1950s, my parents took me to Jamaica to live which must have planted in me the seed to travel, as I have been travelling ever since. I have lived in ten different countries and worked in five-star hotels and restaurants around the world as a chef. I have also worked on cruise ships, Antarctic supply ships, a gold mine in Papua New Guinea and the Falkland Islands after the war with Argentina.
I have written seven books in total, five of them are travel books aimed at retirees and baby boomers and I have also written a biography, “You will never amount to anything”.
I have now retired to Thailand where I live on the beautiful island of Koh Samui and travel extensively throughout South East Asia researching my travel books.

At what age did you realize your fascination with books? When did you start writing?
The first books I remember reading were the Just William series of books by Richmal Crompton. As I matured I read everything Charles Dickens wrote and all of The Hobbit series of books by J. R. R. Tolkien, I also loved Catch 22 by Joseph Heller. My daughter was born in 1974, and as she grew older I would read Watership Down by Richard Adams to her at bedtime. Looking back now it was probably a little scary for a little girl, but she loved the book as much as I did. Being at sea for much of my life, books were an important source of entertainment in the few leisure hours that you get working on a ship. I would read everything that I could get my hands on, from Agatha Christie to Ernest Hemingway, from Nevil Shute to Leslie Thomas.
I started writing at the age of 65 when I retired in Thailand. With 60 being the new 40 that would be 41 in new years. I wrote my first book The Retire in Thailand Handbook for retirees and baby boomers who may be looking for an alternative retirement plan, to retire to a country where their pension dollars will stretch much further. I found that I loved writing so much that I made the book into a book series, “The Retirees Guide Travel Book Series”. I also wrote a biography “You Will Never Amount to Anything and have just finished my first novel; The Deptford Mask Murders.

Who are your favorite authors to read? What is your favorite genre to read. Who Inspires you in your writings?
My favourite authors of today are James Lee Burke, Elmore Leonard, Dennis Lehane, Kate Atkinson, and Khaled Hosseini. I also like to read any travel-related books especially anything by Michael Palin and Bill Bryson. I don’t think any author actually influenced me, I just loved losing myself in a good book, but many authors have inspired me, Ernest Hemingway, Harper Lee and Charles Dickens.

Tell us a little about your latest book?
The book is called; “The Deptford Mask Murders; the First Capital Murder Trial in 1905 Using Fingerprint Forensics.”
The inspiration for the book came from my brother John. It was his project but he sadly died while the book was still in its planning stage. I decided to research the story myself and when I started to read about this fascinating period of criminal history I could see how the story of the Stratton Brothers trial had impressed my brother so much, so I chose to write and publish the book as a tribute to him.