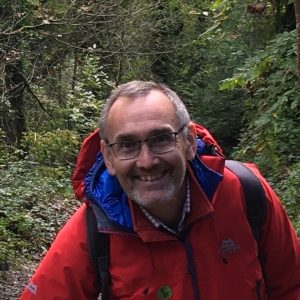 Tell us a little about yourself. Where were you raised? Where do you live now?
I was born in Chelmsford, Essex in England. We moved to south Africa when is was three. When I was thirteen we moved to Montreal in Canada. We came back to the United Kingdom when I was eighteen. I now live on the Isle of Skye in Scotland with my wife, Helen. I have a Pyrenean Mountain Dog called Sophie, she is the seventh dog of that breed we have shared our lives with.
I studied history at university and taught it as a secondary school subject for many years. Having retired, I finally had the time to start crafting novels. Time is a precious gift.

At what age did you realize your fascination with books? When did you start writing?
I loved books from the moment I could read. To open a cover and find a whole world waiting in the words on the page. Amazing! I still get a kick out of it.
I think I started writing at around ten years old. Adventure stories. A bit later it was terrible love poetry and the a very self-absorbed novel about unrequited love!
Fortunately, as I got older, I found outlets for my love of writing, starting with the school literary magazine and culminating in a PhD thesis! Along the way, I wrote a few novels that never made it out of the cupboard.
Finally, I got my break with The Conrad Press.

Who are your favorite authors to read? What is your favorite genre to read. Who Inspires you in your writings?
I do love reading all kinds of historical books both fiction and non-fiction. But I also love fantasy and science fiction, not to mention mysteries, adventure stories and comedy. Even better if several genres come together like Terry Pratchett.
I admire Ernst Hemmingway for his ability to conjure a scene with admirable economy. I marvel at John Irving’s imagination. I love the elegant but down-to-earth wit of Alexander McCall Smith.

Tell us a little about your latest book?
Serving Shaka is due out Spring 2022. It is the sequel to Needing Napoleon. I had always wondered what Napoleon might do had he escaped St Helena and lived longer? These two books imagine that. I researched for more than a year but each book only took about four months to write.
Napoleon is a controversial figure but I can’t help admire how he rose from obscurity to dominate Europe. Shaka Zulu is another magnetic figure, often vilified, but about whom much less is known. This gave me plenty of leeway with my plot!