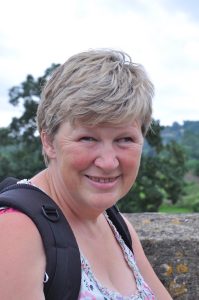 Tell us a little about yourself. Where were you raised? Where do you live now?
I live on a canal boat in the south of England with my husband and our Romanian rescue dog, Bella, and our elderly cat. We’ve been on the boat for ten years now and before that we lived in France where I learnt to speak fluent French pretty quickly.
I was diagnosed with Asperger’s Syndrome (High Functioning Autism) after two of my now grownup sons were, and that explained a lot to me, especially my life long love of horses and my obsession with all things Arthurian.

At what age did you realize your fascination with books? When did you start writing?
I think I loved books from the moment I learned to read. I remember at aged just 7, when we moved from Infants to Junior School, having to do a reading age test that made me very nervous at the time. It was only years later that my mother told me I’d had the highest reading age in the class at 14. Unsurprising really, when you consider I was already reading books like Kipling’s The Jungle Book and My Friend Flicka all by myself.
I began writing at age 5 when my parents gave me a Petite Children’s Typewriter, and with a few breaks for children and working, I’ve written ever since. My third book is about to come out, published by Dragonblade Publishing, and I have some children’s and YA books with my agent at the moment.

Who are your favorite authors to read? What is your favorite genre to read. Who Inspires you in your writings?
I will read anything that is well written. I still love good children’s books even though my own children are all grown up. I used to love reading to them at bedtime and any other time they wanted, and would choose books they might have found a bit more challenging, loving it when they wanted more.
One of my all time favourite authors has to be Nevil Shute. He’s long dead now, but I could read some of his books over and over again and still love them. I belong to the Nevil Shute Norway Society.
I like a well-plotted thriller, a romance with a good storyline that’s not just all about the romance, historical fiction that’s well researched and believable, and wouldn’t say no to horror, scifi, mystery at all. So long as it’s well written.
I think when I first began writing in earnest with the idea of being published, and began my MG novels that I’d like to get published now, my biggest influence was probably Alan Garner and his wonderful children’s stories about Alderley Edge in Cheshire.
As an adult I suppose it might be Philippa Gregory and her well-researched historical novels.

Tell us a little about your latest book?
I won Dragonblade’s The WriteStuff competition last year with Guinevere: The Dragon Ring, about a modern young woman who is kidnapped back to the Dark Ages by Merlin to become King Arthur’s Queen Guinevere and help him fulfil his destiny. It takes me about a month to do the first draft (they’re all about 100,00 words and over – the last is 120,000 at the moment) and then a few weeks after that to revise.

Gwen is feisty and strong willed, and finding herself in a society where women are viewed as chattels and not expected to have an opinion on anything comes as a big shock. As do many of the living conditions – a bucket in the corner as a toilet, powdered charcoal to brush her teeth, no stirrups on her horse’s saddle, rabbit skins as nappies (which way out, one wonders – it doesn’t tell you that when you research it!).

My publisher is bringing book three out on May 31st, and in this Gwen has found her place in Dark Age society and educated her somewhat male chauvinist husband in how to treat a woman. She’s also presented him with an heir, which happened in book two. But they’re still finding their feet both as a couple and as a king and queen.

Arthur is a flawed hero, handsome of course, but even though Gwen has come to love him, she’s frequently irritated by his attitude. But she’s also got Merlin as her friend, and he’s not the old greybeard we always imagine him to be. He’s a warrior who looks about Arthur’s own age, but is he? There is a small element of magic about the story, as there has to be in a retelling of Arthurian legend, but there’s also a lot of historical realism, and lots of the characters in the book were ‘real’ people – as far as we know.

I’ve tried to follow as much legend as I can, which led me down many rabbit holes of research, which I loved. I think if you’re writing a retelling of Arthurian legend you do need to include certain elements – Merlin, the sword in the stone, Excalibur, Medraut (Mordred), Tintagel etc. You’ll find them all in my books, although some of them I’ve put a slight twist on. I like to surprise my readers.

You won’t find a Lancelot though, as he’s a later medieval addition, and French! This is strictly British and very much post-Roman with ruins of their towns and cities and villas scattered all over Britain. The armies march up the old Roman roads and take shelter in ruined Way Stations. There are threats from all sides – the Saxons in the south and east, the Irish in the west, and the Picts from north of Hadrian’s Wall. Not to mention strife between rival British kingdoms.

And over all of this hangs the threat of Camlann, Arthur’s final battle in which Gwen fears he’ll fall at the hands of his nephew Medraut. She knows all the legends, and with that knowledge she wonders if she can change history, or if perhaps it’s already set in stone.

I’ve recently finished book six, and am quite sad to say goodbye to Arthur and Gwen.