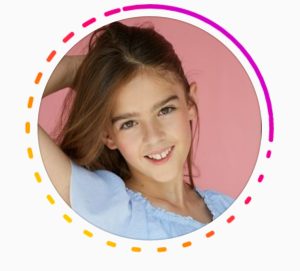 Tell us a little about yourself. Where were you raised? Where do you live now?
My name is Emilia Ramos Samper and I am one of the youngest people to ever publish a novel. I wrote my first book, "Crown of Scales and Wonder" when I was ten and my second book is coming out this year. I've won 1st and 3rd place in the LaPlume Young Writer's Contest. My hobbies include theatre, voice, and playwriting! I was raised in Denver, Colorado and now live in Miami, Florida. I have two siblings and my adorable dog, Snowy (funny cause we live in Miami)!

At what age did you realize your fascination with books? When did you start writing?
I have been fascinated with books ever since kindergarten. There was something about the worlds and characters that authors could create with a single sentence that made me so determined to do the same. In elementary school I buried myself in books until one day I decided to write one. In fourth grade, I did, and now I'm a proud twelve-year-old author.

Who are your favorite authors to read? What is your favorite genre to read. Who Inspires you in your writings?
One of my favorite authors is Christopher Paolini, because I love the way he writes mythical creatures with such grace and depth. I also love Leigh Bardugo for her intriguing character work. In her novel, "Six of Crows" the characters have so much depth and backstory, something I try to include in my own work. As can probably be seen from my favorite authors, I am a fantasy junkie. Beasts, dark magic, and all things fantasy inspire the world of my books. However, I also take aspects of trips and people I've met on them into my books.

Tell us a little about your latest book?
"Crown of Scales and Wonder" is my debut novel, telling the thrilling tale of two teens locked on separate sides of a timeless war. It is available on Amazon in paperback and eBook. Here is the description:

In a kingdom torn apart by dark magic and a million year war, Princess Naomi Elistaire searches for answers amidst the facade of her palace imprisonment. With an irreversible gift ready to destroy her and a martyred father buried in a web of lies, who’s to say which way fate will turn?

Deep underground, Agent Ez Shores trains everyday at the dragon base, waiting for the revolution, the day to kill the Queen. But as dangerous bloodlines reveal themselves and a seemingly suicidal mission is handed to him, Ez finds himself locked in the palace dungeons, facing the daughter of his worst enemy.