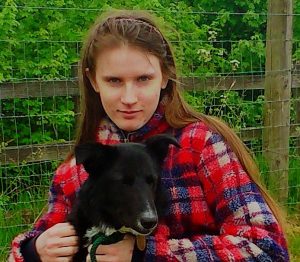 Tell us a little about yourself. Where were you raised? Where do you live now?
I was born in the county of Yorkshire in the UK in 1998 and moved to my current home in the county of Somerset before I was 5. My early schooling didn’t go well and I was home-schooled from the age of 7. When I was 18, I was diagnosed with Aspergers (an autistic spectrum disorder) which explained a lot about the difficulties I had experienced in school.

While I struggle to understand people, I have a natural flare with animals and have volunteered in a number of different animal rescues. Animals make far more sense to me than people. This is probably why my stories are written through the eyes of the animals.

I an definitely an animal lover and my pets are as quirky as I am. have a Shih Tzu who thinks she’s a Border Collie, and a Border Collie with the attention span of the average Shi Tzu. While my autism means I struggle with sensory processing and social anxiety, a really cool quirk of this is that I can smell colours.

At what age did you realize your fascination with books? When did you start writing?
I stumbled into writing at 14 when I began to struggle with depression and anxiety, and quickly found my ideas pouring out faster than I could get them onto paper. Writing is rather like a mad frenzy at the best of times and I often have no real concept of what I’m writing about until after the story ends. It can feel more like being a secretary than a writer. Despite this, my first foray into writing was very successful and the second children’s book I wrote was published in 2017. This is the first in a planned series of books for 7-11 year-olds.

My inspiration can come from a conversation, dream, YouTube video or photograph.

Tell us a little about your latest book?
‘Akea – The Power of Destiny’ is a middle grade chapter book for 7-11 year-olds, although younger children will enjoy having it read to them, and adults will enjoy it as a light read. Wonderful illustrations accompany the narrative, giving a nice visual. This husky/wolf story is a new addition to the great animal fiction tradition of Jack London and Erin Hunter, where the story is told through the eyes of the animals. It is a captivating coming of age story which also teaches children about friendship and loyalty, and that being different doesn’t mean you can’t belong.

From the moment she was born into her husky family, her father, Kelleher, knew Akea was different. She somehow stood out from the rest of the litter even though Kelleher didn’t know why. As the pups grew and were able to play outside, a lone wolf appeared and watched from a distance. Akea was intrigued and felt drawn to the wolf, despite the firm warnings from her parents to stay away from him.

“Akea would always scan the edge of the woods in case the wolf came back, but she dare not let her father see her. Every night the wolf plagued her dreams, and although she had no idea what it meant, she was not afraid.”

Akea is born into a family of sled dogs and a life that follows a predictable path, but from the day she first sees the lone wolf, Kazakh, Akea knows her future lies beyond the safety of her home. Kazakh is well aware of Akea’s destiny and the pack laws he will break to help her reach it. Regardless of the challenges ahead, he must make sure this young husky will be ready, even if it means his life.

Her journey includes love and loss, teaching her a great deal about herself and her priorities. As in all the best stories, good and evil battle for supremacy, with several surprises and twists along the way.

The follow up story to this, ‘Akea – His Mother’s Son’, will be available later this year. Chapter one of this dual narrative story is available to download from the website.