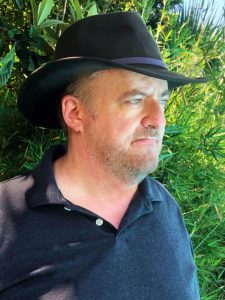 Tell us a little about yourself. Where were you raised? Where do you live now?
I am a retired Coast Guard officer current working as an analyst for the Joint Staff in the Department of Defense. I originally hail from a small town in Illinois about an hour-and-a-half northwest of Chicago, but haven’t lived there since I entered the Coast Guard at age 17. I had a wonderful time in the service, working as a ship driver, aviator and instructor, stationed mostly along the Gulf Coast and Washington, DC. Post-retirement, I have knocked around a bit, from Northern Virginia, to Fort Rucker in Alabama and New London, Connecticut. I am currently living in the Florida Panhandle, near my work place on Eglin Air Force Base.

At what age did you realize your fascination with books? When did you start writing?
I was reading back as far as I can remember – there was little else to do back then, particularly in the winter of Northern Illinois, where the only alternative was watching bad TV. I had a particular fascination with science fiction, although I enjoyed the Sherlock Holmes stories as well. I evolved into a good technical writer during my service and afterward, but I had not considered writing fiction until very recently. A number of my colleagues and superiors had remarked on my ability to make highly technical analysis and reports interesting to read and I thought I might try to leverage that talent into fiction. It took a fair bit of trial and error to find a good balance between the technical accuracy that I was used to writing and the “flexibility” in language to make the prose interesting to people who were not technocrats, but I think I got there. 😉

Who are your favorite authors to read? What is your favorite genre to read. Who Inspires you in your writings?
If I had to pick a contemporary favorite, it would have to be Jeff Shaara. He was a unique talent in creating dialog to go with the historical figures in his novels that breathe life into historical events. When he launches a book, I buy it, and I have never been disappointed. For past authors, I loved C.S. Forester’s Hornblower series and the earlier Bolitho novels by Douglas Reeman (writing as Alexander Kent). Ray Bradbury and Robert A. Heinlein were also perennial favorites for when I wanted a light scifi read and Isaac Asimov and Arthur C. Clarke picked up the slack when I was looking for more heft.
As far as inspiration goes, I suppose I would point to Jeff Shaara – my characters are more of the “everyman” variety faced with extraordinary challenges, much like the historical characters in his books. One exception is the neurodiverse genius analyst Victoria Carpenter in my Cutter Kauai series. Helen Huong’s “The Kissing Quotient”, although a bit racy for my tastes, provided an excellent point of view reference for a high-functioning individual on the autism spectrum. This book helped me make Victoria into a vibrant, appealing character rather than a caricature or object of pity.

Tell us a little about your latest book?
Bravely and Faithfully is the third in my seaborne action/adventure series about a Coast Guard patrol boat and crew trained and equipped for special missions in Southern Florida, The Bahamas, and the Caribbean. The fundamental challenge in the novel involves a young coast guard officer, Lieutenant Haley Reardon, assigned to succeed a very popular commanding officer of the Coast Guard Cutter Kauai, a special mission patrol boat with an elite crew. Her leadership style is different from the previous CO, leading to conflict with her Executive Officer, Lieutenant Junior Grade Ben Wyporek, and the senior enlisted personnel. Ben is also overcoming the challenge of his courtship of a Victoria Carpenter, a genius with a mild form of autism (previously known as Asperger’s), and the transfer of his best friend (the former CO). These struggles take place against a background of tension and danger as the boat is assigned a dangerous sortie supporting a Defense Intelligence Agency spy mission with geopolitical implications.

The story opens with a young family of four trapped on a disabled sailboat in the path of a major hurricane. When all seems lost, they are saved by Kauai’s crew in an extremely hazardous rescue operation. The action continues as the crew foils an attempted sabotage of a multi-billion dollar space probe launch by radical activists and rescues two dozen women destined for sexual servitude aboard a sinking smuggling ship before the climactic spy mission.

The story digs into the friendship and teamwork of a typical ship’s crew, illustrating the bonds and humor common to Coast Guard and other military units and the price they and their loved ones pay for their service.

The e-book launches on Amazon, Kobo, and the others on 2 August, although the paperback is available now. It was a relatively quick turnaround for this book, considering I started writing in earnest in early December and had a day job with travel the whole time. It was a remarkable journey for this book – I was banging my head for months trying to get this story started. Once I did though, everything seemed to come together.