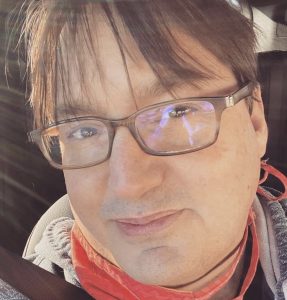 Tell us a little about yourself. Where were you raised? Where do you live now?
My name is David-Matthew Barnes. I’m an author, playwright, poet, and screenwriter. I write in multiple genres, primarily young adult, romance, thriller, and horror. I grew up in Northern California, but I’ve also spent a considerable amount of time living in Chicago (my favorite city). Today, I live in Denver. I have one dog and two cats.

At what age did you realize your fascination with books? When did you start writing?
I fell in love with writing at the early age of 7. I wrote a Halloween-themed story titled ‘The Blue Witch’. My second-grade teacher recognized my love of storytelling and really encouraged me. Thanks to my sixth-grade drama teacher, my first play was produced when I was only 11. The script was a tribute to soap operas titled ‘Life Isn’t Easy.’ By the time I was 13, I was writing plays and short stories on a second-hand typewriter. At that age, I met young adult author Norma Fox Mazer (who was a visiting author at my junior high school). That was the defining moment when I knew I would become a writer. As for books, I’ve been an avid reader for as long as I can remember.

Who are your favorite authors to read? What is your favorite genre to read. Who Inspires you in your writings?
Growing up, I read everything written by Judy Blume, Lois Duncan, and Norma Fox Mazer. Collectively, those three authors have influenced my work more than any other. To that list, I would also add Jane Austen, Tennessee Williams, and Dorothy Parker. I read many genres, but mostly memoir, young adult, and thriller. I also love vintage gothic romance novels, especially those written in the 50’s and 60’s because of the awesome cover art during that era.

Tell us a little about your latest book?
My most recent book is a young adult novel called ‘Marijuana Mermaid’ (Cayélle Publishing). The book is about a young woman who is seventeen and dealing with many issues in her life. After getting into trouble at her high school in Chicago, she moves to a small seaside town in California to live with her father. She makes a big effort to leave her past behind, which is really put to the test by new friends Monica and Sabina, who are two popular girls who seem to have it all. While secretly dreaming of becoming the new star of an underwater mermaid show at a local theme park, Leah lands a part-time job at the park’s snack bar where she meets Ray Junior. As their new friendship begins to grow, Leah comes to the realization that there’s more to him than meets the eye. Ray Junior really encourages Leah to stand on her own. Leah feels his support and tries to distance herself from Monica and Sabina, but she’s unaware of the consequences for doing so. The novel explores a lot of issues from female rebellion to gender roles and racism to what it feels like to be the child of divorce. From start to finish, I worked on this novel for over 20 years.