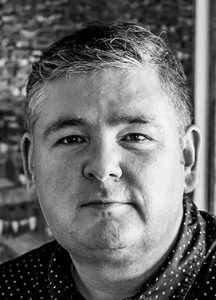 Tell us a little about yourself. Where were you raised? Where do you live now?
I was born in London but am Irish (despite the strong Cockney accent that I have never lost) and have spent most of my life in Limerick in Ireland, where I live with my wife and son. I’m a big film buff, with a collection of nearly five thousand movies on DVD. I also read lots of books and comics, and like to study and collect original artwork, especially comic art, modern art, and sculptures. Other interests include long walks, going to soccer matches (I’m a Tottenham Hotspur and Ireland fan), listening to pop and rock music, theatre, worldwide travel, sampling the delights of both gourmet cuisine and finger-licking junk food, and dreaming up new ways to disturb and entertain my readers!

I’ve been an incredibly prolific author — my next book, Midsummer’s Bottom, goes on sale on June 21st and will be the 50th book that I have published in just over 19 years. Most of those books have been for a YA audience and released under a different alias which might be more familiar to a lot of people reading this — Darren Shan.

At what age did you realize your fascination with books? When did you start writing?
I’ve wanted to be a writer since I was five or six years old. I loved telling stories even back then, and although I day-dreamed about being lots of different things, being a writer was my number one choice. I began to seriously chase the dream in my early teens, when I started writing lots of short stories, experimenting with genres and styles, and I’ve never looked back.

Who are your favorite authors to read? What is your favorite genre to read. Who Inspires you in your writings?
Horror is my first love, and Stephen King is my favourite author, but I like to read widely, all different types of genres, mostly newish work, but also old classics. I can go from a dark contemporary horror to a book for children to something by Dickens or Tolstoy to the latest Jack Reacher. I pick up inspiration everywhere — a writer needs to be like a jackdaw, swooping fast on anything that glitters, then decorating their nests with the fruit of their plunderings.

Tell us a little about your latest book?
Midsummer’s Bottom comes out on June 21st (Midsummer’s day). I actually wrote the first draft twenty-one years ago, then set it aside for a long time before returning to it to fine-tune it and knock it into shape. It started when I saw a performance of A Midsummer Night’s Dream by a group of local (Limerick) actors called the Island Theatre Company. They were very good, and the play was a delight to watch in their capable hands, but afterwards I started to think what it might be like if a group of very BAD actors got their hands on it, and insisted on performing it outdoors every year on Midsummer’s Eve. I was interested in writing something along the lines of the Ingmar Bergman movie, Smiles of a Summer Night, which was later turned into the musical, A Little Night Music. A story that would focus on how foolish we mortals can be, but that would also warmly celebrate our foolishness. And, of course, there had to be fairies! In my story, the fairies mentioned in the Shakespeare play are compelled to attend every performance of it that is ever staged. They tire of the determined but dreadful actors in Limerick and decide to hire a human agent of chaos to infiltrate their ranks and break them up, but things don’t go quite the way the fey folk expected…