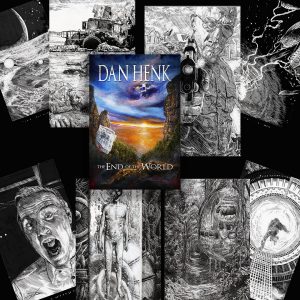 Tell us a little about yourself. Where were you raised? Where do you live now?
Dan’s early career included a year and a half stint drawing political cartoons for Madcap Magazine and illustrating underground projects such as Maximum Rock and Roll. In 1997, after struggling through a violent car crash and a knife fight with a crackhead that severed the tendon on his left thumb, he attended art school. Receiving some commercial and local gallery acclaim for his artwork, he moved to New York City in an attempt to kick start an art career. Heavily immersing himself in the local hardcore scene, he produced artwork for the bands Shai Hulud, Indecision, Coalesce, Locked in a Vacancy, Beyond Reason, Zombie Apocalypse , not to mention various local record labels and venues.

In 2000, he started tattooing, initially working on many musician friends. A year later, in September 2001, he was stricken with brain cancer and underwent surgery, chemotherapy and radiation. Three months after the surgery, he married fellow tattoo artist Monica Castillo.

After a brief trip down south, that included owning a short lived tattoo shop with the infamous Joe Truck , in a venture that ended in disaster, he returned to Manhattan. His work started appearing in both a growing number of tattoo magazines and more fine art influenced outlets such as Aphrodesia, and The Tarot Project. Tattoo related books such as No Regrets: The Best, Worst, & Most #$%*ing Ridiculous Tattoos Ever and Inside the Tattoo Circus: A Journey Through the Modern World of Tattoos also took notice and included features.

Tragedy struck again in 2007, as his wife of 6 years, Monica Henk, was killed in a motorcycle accident by a hit and run driver. Despite extensive coverage in the local media and vigorous campaigns by both the tattoo and motorcycle community, the culprit was never found.

Sick of New York, he moved to Austin, Texas for three years, and started doing a regular comic strip entitled “Rollo & Me” for Tattoo Artist Magazine. Illustrations for Black Static Magazine, and This is Horror followed suit.

His first novel, The Black Seas of Infinity, was published by Anarchy Books in 2011, and he started an illustrated calendar featuring a variety of artists. A limited edition chapbook entitled “Christmas Is Cancelled” came out courtesy of Splatterpunk in 2013. In 2014 he started columns for Tattoo Revue and Skin Art magazines. That lasted 3 years. A reissue of his debut novel was put out by Permuted Press in April 2015. A collection of his short stories entitled “Down Highways In The Dark…By Demons Driven” was released by the same publisher in August. He continued his work for independent magazines, doing art for Red Door Magazine, The Horror Zine, Litro Magazine, a slew of books by the imprint Out Of Step, and every issue so far of the British horror zine Splatterpunk. Books started to feature his artwork on their covers. “The Sopaths” by Piers Anthony, “Splatterpunks Not Dead”, and “Splatterpunk Fighting Back” among them. His third novel “The End of the World” debuted this year, and his seventh book cover on the novel “Insatiable” should be out any day now.

At what age did you realize your fascination with books? When did you start writing?
I grew up on isolated army bases without a TV. Every week I’d make a trip to the library and check out a stack of books, and all of them would be read by the time I went back a week later.
As a teenager, I became connived I would be an artist an writer. By that point I lived in Gainseville, Florida, would work on storyboards all week, and take them on weekends to the local indie comic artists at book stores in town for review. Being kicked out of my house and homeless at 18 didn’t derail my plans, I eventually attended art school on my own dime, and moved to NYC to pursue a career.
Interviews with Marvel and DC convinced me I would need illustrated novels to bring my stories to life, and I started the core of what would become my first book. Brain Cancer and the hit and run death of my wife slowed my plans, but I finally saw the publication of my first book in 2011. I’m on my third now, and just getting started.

Who are your favorite authors to read? What is your favorite genre to read. Who Inspires you in your writings?
HP Lovecraft and John Steinbeck most influenced my writing style, with the wild imagination of one and the attention to detail of the other. That said, I read constantly. Alan Moore, Neil Gaiman, Frank Herbert, William Gibson, Neal Stephenson, Philip K. Dick, Richard Matheson, and Anne Rice were some of my favorites, with newer writer’s like John Scalzi and Caitlin R Kiernan constantly grabbing my interest. I like anything with a darker, more realistic tone, especially sci-fi and horror.

Tell us a little about your latest book?
In a not-too-distant future, the US has fallen into near social and economic ruin. As the fringe elements of society and ordinary citizens alike struggle to deal with the terrifying new reality, a maelstrom of governmental deceit and malevolence churns just beneath the surface.

Against this chaotic backdrop, strange new beings have risen out of the rubble. A former government worker, who in a fit of obsession and delusion steals and inhabits alien technology during a violent raid… A teenager whose reality contorts, making him privy to the cries of the dead as he stumbles in and out of worlds in a surreal game of musical chairs… Soon things take a dark turn for the newly emerged pariahs.

A long-running conspiracy involving a highly proficient military-industrial complex is attempting to resurrect an ancient horror, and the very outsiders laboring to cope with the dangerously altered state of the world might be the only ones who can do anything about it.

The End of the World is my latest book, a loose sequel to my first The Black Seas of Infinity, with some of the characters in my second book Down Highways In The Dark…By Demons Driven making appearances. Inspired by comics and novel series, I like to keep everything in roughly the same universe.