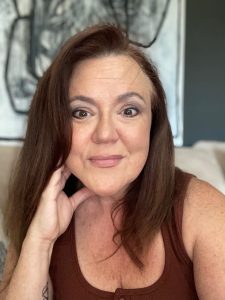 Tell us a little about yourself. Where were you raised? Where do you live now?
I live approximately fifty miles northeast of St. Louis in the village of Kane. I was raised around this area. I left right after graduation and joined the United States Air Force, where I served just shy of 8 years before being medically separated.

I am the mother of three adult children, grandmother of four, and mother of one spoiled dog, Elise. Elise works hard when I write. She keeps guard of the area around my feet, more like snores, as I write.

I am a pantser. I don’t outline and plan before I write. I have a story in my head, and I sit down and type as it plays out. I never know the story’s ending until midway through the book. Then the ending changes multiple times.

At what age did you realize your fascination with books? When did you start writing?
I’ve always loved to read. Reading provided a great escape for me. I began journaling early, and that is when I began writing. Roughly fifteen to twenty years ago, I acquired a desire to write “my story,” but I knew because of the subject matter, the story would need to age like a fine wine before seeing the light of day.

I write thriller, suspense, mystery, and romance all rolled up together. I plan on trying my hand at several genres.

Tell us a little about your latest book?
The Whole Truth is book two in the So Help Me God series. The Whole Truth begins right where the first book left off. The reader finds Dahlia and Roland on a mission to find forevermrshughes, but most importantly, the sender of the mysterious black dahlias. But before that can happen, they embark on vastly different and dangerous paths, discovering a new nemesis.

The first book, The Truth, introduces the reader to Dahlia Frost. She’s a new author who wrote and published a novel, Daddy Issues, under a pen name. When her identity is mysteriously revealed once her ex-boyfriend makes a grand entrance at her book signing, bringing with him the national spotlight. Determined to succeed against all who bet against them, Roland and Dahlia find themselves threatened, stalked, kidnapped, and torn apart by deception. And that is just by those who call themselves family. Finding their way back to each other, vowing no more secrets will come between them, their love and commitment are immediately tested.